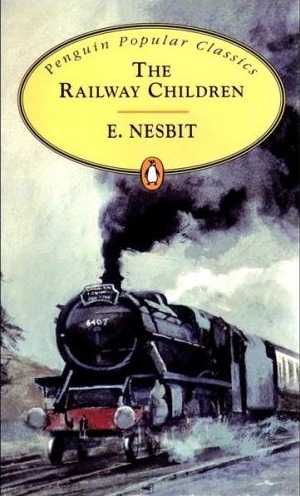 1: Railway Children
2: Book
3: 60 pages
4: Bobbie, Peter and Phyllis are living with their mum and dad in London. They are very happy, but one day, their dad disappears. Only their mother know where he is but she doesn’t tell it to the children. They moved to a little white house, near a railway line. The children are always watching the trains passing by. They are always waving to the train, thinking that the train will take their love to their dad. There is always a man sitting in the train from 9,15, that is waving back to them. One day, mother is ill. The children ask the man in the train, if he can get medicines for her. The old man is taking the medicines with him, and mum is getting better. When Bobbie, Peter and Phyllis are going to watch the train from 9,15 one day, they see that there are trees lying on the railway, the went to the station, and warned the train. They saved many lives. A few weeks later, there is a paper-chase, organized by a school. Of course the children are wanting to watch. They see the other children going into the tunnel, but when they come out, one is missing! The tunnel is more then a mile long! They go into the tunnel to find the missing boy. When they were in the tunnel, a train passed by. It nearly misses the children. A few minutes later, they found the missing boy. He’s is lying on the ground, sleeping. When they woke him up, he says that his name is Jim, and that he has broken his lag. Peter and Phyllis, went to the closest farm, to find help. They can save the boy. One week later, the children are going to watch the train again. All of the people are waving to them. The children don’t understand why they are so happy, but when they get to station, they sees their dad. He’s telling that he was arrested, because they thought he was a spy. Later, they founded the real spy, and so he became free. All has become well.
5: Bobbie: Her real name is Roberta, but they always call her Bobbie. Bobbie is the oldest of the children.

Peter: He’s in the middle. He always wanted to be a engineer later.
Phyliss: The youngest of all. A very clever girl.
6: The story is happening in England. In the beginning in London, and later, in a small village near London, in the year 1922.
7: Hare: Haas
Charity: Aalmoes
Petticoat: Rok
Yard: Terrein
I’ve learned what paper-hunt is; It’s a game where someone drops paper all the time, and then the other boys have to try and catch him.
I liked it, because I like reading and it was a good book. The only thing that I didn’t really like, was that I already know what was going to happen.
8: Something special about this book is that they made a movie about it as well. The writer of this book, Edith Nesbit, died in the year 1924, and didn’t saw the movie, because it was made in 1967