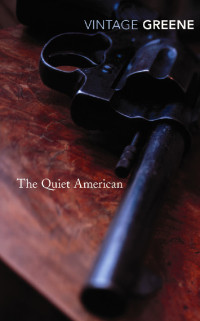 Meld je aan!
1. State author, exact title (underlined), name of publisher, year of publication of your edition, and when your novel/play was published for the first time, number of pages.

State author: Graham Greene
exact title: the Quiet American
name of publisher: Wolters Noordhoff, Groningen
year of publication of your edition: 1965
when your novel/play was published for the first time: 1955
number of pages: 191

2. The reason(s) why you chose this novel/play .

There’s no special reason for choosing this book, I had to choose one for my English list and the book looked fun to me, because the subject really attracted me.


3. What is the plot of the novel in your own words?

Fowler is a British reporter who has left his wife and lives in Saigon with a Chinese woman during the Vietnam war. His wife still lives in the UK. An American diplomat, Pyle, arrives in Saigon. He falls in love with Phoung. Pyle gets involved with the underground resistance which leads to the death of innocent people.
Fowler discovers these murders and gets so annoyed about this, that he uses his private relations with Chinese people to kill Pyle, without reminding that Pyle had saved his life in Saigon once.
Fowler gets involved with the death of his friend Pyle because Pyle’s girlfriend Phoung is living with Fowler for some time.
Fowler and Phoung were waiting for Pyle. They were smoking opium when the police came to their house. Fowler was questioned about the death of Pyle. Pyle was murdered, he was wounded in his chest, but the real cause of death was the mud in his lungs. Fowler tells Phoung the bad news. Phoung decides to stay with Fowler.
The first meeting between Pyle and Fowler is described. In a bar they talk about York Harding, because Pyle is really interested in his books.
After that the war near to Phat Diem is described. A church full of refugees, a rode with twelve warriors. Fowler is there when they discover the dead bodies in the canal.

Pyle went with the air transport to Hanoi where he left a letter for Fowler. In the letter he thanked Fowler for everything he had done for him and he promised he wouldn’t see Phoung before Fowler was back and that he wouldn’t tell Phoung about it.
Eighty miles north of Saigon Pyle and Fowler meet again. Because they don’t have enough gas they got stuck near a watchtower, they were discovered and were locked inside the tower, guarded by Vietnamese soldiers. They were able to escape but Fowler broke his leg by jumping of the tower. Pyle saved his life, he carried him away from the tower.
Before the death of Pyle:
Pyle sees Phoung very often. When Fowler is on the street there’s an demonstration of general The. Fowler discovers that Pyle is also involved by this activities.
When Fowler arrives at his home, Phoung has disappeared. He talks with Pyle about his behaviour. Fowler goes to the north to take part on a bombardment, and he sees how awful it is.
The marriage of Pyle and Phoung was postponed because they want to marry the American way. Fowler warns Pyle to don’t trust general The. Fowler discovers an accident with a bomb in the street. Pyle says it was to cancel a march with officers. But now, innocent people were killed. Phoung wasn’t hurt, because she was warned by Pyle.
Vigot, a policeman, meets Fowler two weeks after Pyle’s death. Fowler talks with Vigot about the behaviour of Pyle, before his death, and the infuence of York Harding. Vigot is persuaded that Fowler didn’t kill Pyle.
Fowler meets Heng, Fowler tells Heng that the behaviour of Pyle was very dangerous, and that he has to be stopped. Fowler makes an agreement with Pyle to eat in the Vieux Moulin. Pyle is apparently murdered on his way to the restaurant by the mans of Heng.
Eventually Phoung and Fowler get married.

4. What is the climax of the novel/play?

The climax of the story is when you figure out that Fowler was responsible for the death of Pyle.
At the beginning of the story you read that Pyle is murdered, but as the story goes on, it becomes clear that it was Fowler and the Heng’s men.

5. What is the meaning of the title?

The title of the book is "The Quiet American". One of the main characters in the book, the American Pyle, is a quiet person. He doesn't talk too much.

6. Who are the main characters? Give a brief description of them.

Thomas Fowler:
A British reporter, who has left his wife and now is living in Vietnam with a Chinese woman. He tries to report about the war without getting personally involved. Pyle is a friend of Fowler, however at the end Fowler is indirect responsible for his death. In the end Fowler and Phoung get married.

Alden Pyle:
Pyle is an US-diplomat. He’s getting involved in the French colonial war. Pyle is very honest and fair to everybody and he’s very naive. He’s in love with Phuong.

Vigot
A French police officer who has to solve the murder of Pyle. Vigot never suspects Fowler.

The novel is about the awful things there happen in a war, also it’s about love and hate and friendship.
Motifs:
1. War => the story takes place during the war in Vietnam, between the French and the Vietnamese.
2. Love/relationships => Pyle and Fowler are fighting about a Chinese girl named Phuong. But Pyle and Fowler also have a relationship; they are friends.
3. Involvement in the war => Fowler is trying not the get involved; he doesn't want to pick sides. And he’s often saying that. But eventually he does pick a side.

Graham Greene was born in 1904 and studied at Oxfort University. He joined the Roman Catholic Church in 1926. He was a novelist, playwrite and he wrote short stories, books, reports, children's books etc. He wrote autobiographic, geographically, about moral dilemma’s about good-or-evil and liked to write thrillers and detective stories. He died in 1991.
Books written by Graham Greene:
- Brighton Rock - The End of the Affair
- Dr Fischer of Geneva - A Gun for Sale
- The Heart of the Matter - The Power and the Glory
- The Human Factor - Our Man in Havana
- The Tenth Man - Travels with my Aunt

- I have chosen page 53 of the book.
At this page Fowler goes together with a group of soldiers on a exploration mission around the city.
At that moment the French soldiers are under fire. The good thing of this page is the tension of the soldiers, who don’t know what’s going to happen next, trying to carry out their tasks. Then Fowler tries to prepare on a possible death.
"Two shots were fired to our front, and I thought, "This is it. Now it comes" It was all the warning I wanted. I awaited, with a sense of exhilaration, the permanent thing. But nothing happened. Once again I had 'over-prepared the event'.
In these sentences you can really feel the tension of Fowler. That is the strong thing of this page. In this part of the page two citizens are shot, a woman and a child. That shows how hard and meaningless war is. At the end of the page Fowler says: ‘I hate war’.
- Vigot reminds me of a friend of my parents. He’s also an policeman, who also has to solve a lot of crimes just like Vigot has to solve the murder of Pyle.
- Fowler and his wife were divorced. That reminds me of my uncle and aunt. After that my uncle moved to another country, just like Fowler.

10. Your opinion and appreciation of the novel/play.

I think the book was very interesting, but still it was very complicated and sometimes very hard to understand everything. But still I will recommend this book to others because it a really good book and I liked reading it

- Fowler lives in a city called Phat Diem in Vietnam.
- In a city called Diem, in Vietnam.
- Middle class, there not very rich or very poor.
- Pyle is an diplomat, Fowler a reporter, Vigot a French police officer.
- The story is set in the early fifties, during the French colonial war in Vietnam
- From March 1952 tot June 1955.

C. What is the point of view? Through whose eyes do we see the story?

The story is told through Fowler's eyes. The language which is used in the book is very important. There are short, reporter-like, sentences in the story. This probably something to do with the fact that Fowler is a reporter.

- It’s tragic, because of the murder of Pyle. That’s a tragic event. But not only Pyle, also lots of other innocent people.
- Also the story is full of hate, because of the war in Vietnam and there’s a lot of crime. Lots of people are killed during the war, at the end of the story even Pyle gets murdered.