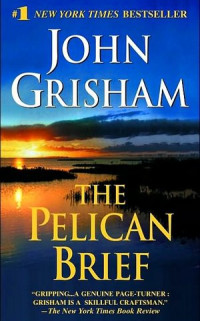 The President and his assistant don’t find it a problem because now they can make the Supreme Court, Republican.

At that morning when Darby turns her t.v. on she sees the president’s speech and decides to play detective by herself. She wants to try to figure out who killed the two judges.
She is searching for 4 days and then writes a legal brief, which later became known as the pelican brief. She doesn’t believe the story by herself but she gives it to her boyfriend Thomas Callahan and he passes it on to his best friend Gavin Verheek. The brief passes along to Washington and finally reached the President.


Many people did see the brief and knowledge of the brief was leaked to Darby’s suspect. This man, Victor Mattiece, sends some men out to kill her.

At one night when she still doesn’t know that there are people searching for her, her lover Thomes Callahan steps into the car, which she was supposed to be in, and blows up. After that she is getting to know what is going on and runs for her life fearing for her life.

She decides to go to New York via O’Hare Airport in Chicago. When she is in the plain she gets in touch with a reporter for the Washington Post, Gray Grantham.

For the first time she tells somebody about what is happening and Gray Grantham decides to help her, to risk his own life. He would publish her story but first he must have another source that confirmed the pelican brief.

Then he remembers himself that there was a man ‘Garcia’, which did call every time, but wouldn’t tell what he had to tell. Now he did almost didn’t call for a few weeks! They began a search to him but after a week they are hearing he is dead. Killed. They go to his widow, who gives them a key to a safe-deposit box. The safe contained an affidavit, a copy of a conspiring memo and a video with a testimony. At the film tells the man ‘Garcia’ ((Curtis D. Morgan)) what he knew about the conspiracy to kill the Supreme Court judges.

Curtis D. Morgan was a lawyer for White & Blazevich, a law firm in Washington D.C. Victor Mattiece, was an important client to the firm...


Then Darby and Gray go to the office from, the Washington Post director, Smith Keen and ask him if it would be possible to publish the story. They write the article in just 2 hours and the next morning the whole world would know what really happened.

Characters
Main character: The main character is Darby Shaw. She is a student at a law school in New Orleans. The most man would say she looks beautiful. She had red hair, long legs and is very rich. She has a relationship with her teacher Thomas Callahan. She writes the pelican brief which later costs later Thomas live.

Other Characters
1 Luke. He is the one who picks Khamel up from the boat and brings him to the hotel. He drives in a stolen car.
2 Khamel. He is the most famous and feared killer in the world. He is the best. 20 years ago he killed for political reasons but now he kills anyone if the money is right. Khamel has many names and faces and he speaks several languages. He kills Rosenberg and Jensen but in the story he is also killed.
3 Judge Rosenberg. Judge Rosenberg is an old man who founds it sometimes hard to stay awake, even during trials. He is a liberal. He defends the Indians, the homosexuals, the poor, the black, the Mexicans and the Puerto Ricans. He a judge in Supreme Court. He don’t wants any security in his house. He get killed by Khamel.
4 Judge Jensen. Is also a judge in the Supreme Court. He is gay. Also he doesn’t want any security into his house because he don’t want that the outside world get to know that he is gay. He is also kind of liberal. He also get killed by Khamel.
5 The president. This president is Republican. When he hears that Rosenberg and Jensen are killed he is happy because he wanted always a full Supreme Court with only Republican and all the other were Republicans.
6 Fletcher Coal. Coal is the chief of staff. He is just like the president Republican and hates the FBI-chief.
7 Voyles. Voyles is the FBI-chief. He also hates Coal very much, but he is afraid to lose his job so he stays at the background.
8 Thomas Callahan. He is the teacher and boyfriend from Darby Shaw. When Darby tries to find out what why Rosenberg and Jensen were killed he feels very lonely. This is his first real relationship with someone. He get killed in the book by a carbomb.
8 Gavin Verheek. He is an old study friend from Thomas Callahan. He also get killed by Khamel when Khamel gets the job to kill Darby.
9 Gray Grantham. He writes story’s for the Washington Post. He is on top of the story and gets a lot of information from different people. He helps Darby and at the end of the story they began a relationship.