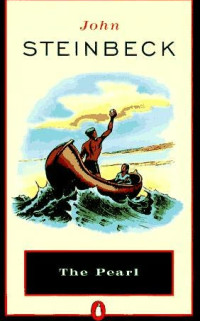 Meld je aan!
One morning A terrible thing has happend, their baby Coyotito has been stung by a scorpion. the baby got very sick. They went to town to see a docter.
The docter did not help them because Kino is to poor. The next morning Kino found an enormous, beautiful pearl. The news that Kino has found a pearl has spread rapidly. Everybody in town hopes to profit of it.
Kino and Juana wanted to get married. In that evening the priest has visit them and later came the doctor. The doctor had give him some medicine and warned Kino that the poison can be active again.That night someone tried to steal the pearl, but after a fight Kino has chased him away.
The next day he goes to the market to sell the pearl.

He refuses to sell the pearl. because he believes that he’s being cheated.
Later on his way back to home he was attacked by some people who want to steal the pearl away, but they don’t get it. After that he was attack again, this time by two men, he kills one with his knife and the other ran away.
He and Juana decided to flee away because kino was responsible for the man’s death.
When they were going back to the village to get Coyotito, they found their house on fire.
that night Kino, Juana and Coyotito left. On there way they see three men coming.
While they were resting they saw the trackers coming nearer.
They hide themselves in a cave for the night, while the trackers camps not far away by the pool. Kino creeps up near the trackers to attack them.
then Coyotito begins to cry. One of the trackers fires his rifle at the noise.
Then Kino attack and kills all three of them.
On his way back he founded Coyotito death, hes’s been hit by the shot.

Together they return to their village and Kino throws the pearl back into the sea.