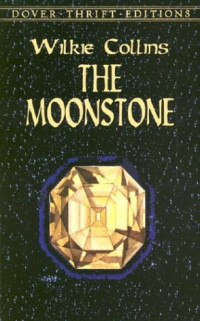 B. Summary
A long time ago, a stone in the head of a Indian statue was stolen. The stone had several owners and each owner died awful ways. The story is about a girl named Rachel Verinder. On her 18th birthday she gets a stone from an uncle (a corrupt English colonial army officer). She puts it on her dress on the night of her birthday party for everyone to see. During the diner there are thee Indian men who want to show some acrobatic tricks.
The next morning when Rachel awakes the stone is gone! That day a detective from London came to investigate the theft. The three Indian man where arrested, but they had a alibi that was unbreakable. When the detective want to ask something about the stolen stone to Rachel, she said: “The moonstone is gone, Sergeant. You will not be able to bring it back again!”

Rachel Verinder climbed into a coach and drove away. Sergeant Cuff thought that she pretended that the moonstone was stolen and that she’s got it.

Later that week someone saw Mr. Godfrey Abelwhite and Mr. Septimus Luker leaving a London bank together. When Godfrey entered his house there was a letter waiting for him.
With a request for seeing a old lady at a house who wanted to give a large sum of money to him. When Godfrey arrived one man sized him from the back, a second man covered his eyes and mouth and the third man searched his pockets. Mr. Lucker was also attacked on that day and a receipt was stolen with a big value.

When Franklin visited Rachel, Rachel was shocked and told a story that she saw that Franklin took the stone in a kind of trance. you walked into my room with a candle and searched for the stone.
When you had the stone you walked out of my room and disappeared.
Franklin was flabbergasted and sad: “Rachel, my dear Rachel. I know nothing of this. Somehow I must prove I am innocent of the crime, or I must never see you again.” With these words he left.

When Franklin traveled back to Yorkshire he needed to talk to someone about that night he went to Doctor Candy. When Franklin entered the house, he saw Candy in a ruined health. A young man took over the practice and sad he know master Franklin. He sad that Candy was talking in his sleep and talked about an argue about a price for treating sleeplessness. The young Mr. Jennings thought that Candy did a dose of opium in Franklins brandy.
He sad that he wanted to do an experiment with Franklin under the same conditions at the party. When Franklin was ready for the experiment he took some opium and went to bed. Rachel waited in her room for Franklin to come. She had put a glass stone what used to be the moonstone. Suddenly Franklin sat up in his bed and climbed out, he moved to Rachel’s room and searched in the cabinet for the stone. When he found it he went back to his room and fall in sleep again.


A year later at the bank they waited for somebody to pick up the stone. And believe it or not Mr. Lucker went in and out. But Cuff’s assistant saw that Lucker pass something to a long beard sailor. He followed the sailor to an inn and called Cuff and Franklin. When they arrived they went up to the sailors room. But when they opened the door the sailor lay on his bad……dead.
Sergeant Cuff went over the body and touched the dark face and his fingers. When Cuff took hold off the sailors beard They looked down and saw the face of Godfrey Ablewhite!!

It seems that Godfrey lived a double life. He worked for charity but he also had expensive tastes.

C. Biography of the author
William Wilkie Collins (8 January 1824 – 23 September 1889) was an English novelist, playwright, and writer of short stories.
He was hugely popular in his time, and wrote 27 novels, more than 50 short stories, at least 15 plays, and over 100 pieces of non-fiction work. His best-known works are The Woman in White, The Moonstone, Armadale and No Name.
(source – Wikipedia.com)

D. First & last sentence of the story
The first sentence:
“There was once a huge yellow diamond set in the forehead of a stone statue in an Indian temple.”
This sentence means a lot for the rest of the story.
Cause it’s very valuable for the Indian people And they want it back. The rest of the book goes about that particularly stone.
Think of it, write a whole book about a stone, quite scary I guess.

The last sentence:
“In a temple in India, three holy men sit at the foot of a stone statue. In the forehead of the statue shines a great yellow diamond.”
This sentence gives the indication that the stone has found his original owners. It belongs in the hands where he original belongs.

E. Text fragment and the reason
“He lived a ‘double life’ said sergeant Cuff to Franklin a few days later. He worked for charity, but he also had expensive tastes. He was heavily in debt. He needed the diamond!
“He was the opne who took the moonstone when you dropped it on the floor of your room and fell asleep. The Indians killed him to get it back. I wonder where it is now.”

I think the end is the nicest part of the whole book.
Cause here is tolled how the story fits together witch all his parts. You must read the whole book before you read the last sentence ore else you don’t get it.

F. Personal response
I like this story cause it is not a normal book (It’s a detective)
I’ve never read a book like this (as a matter of fact, I never read a English book).
It is a nice story and there is a lot of tense cause the whole story doesn’t goes about that stone.
There are other things who has to do witch the story like the kidnapping.

Quite a few spelling mistakes, but the plot is summed up nice and easy. Helpfull for the conspectus.