The lion, the witch and the wardrobe door C.S. Lewis 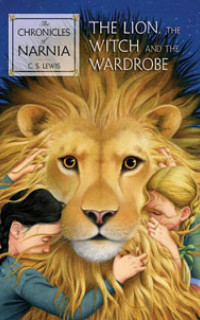 Luister nu!
Title: The lion, the witch and the wardrobe
Author: C.S. Lewis
Mister Tumnes
All of the humans in “ the Lion, the Witch and the Wardrobe “ are flat characters, they have a mission to fulfil. This means I’m not able to describe a development of a round character. So I thought I will sketch Mister Tumnus, the immediate cause.
The nice looking faun in under the force of the white witch. He has to bring children “ Daughters of Eve and Sons of Adam “ to her if they come into Narnia.
But there is one problem, the half looking goat doesn’t want to. He don’t want to cheat people, he doesn’t want to bring people misfortune.

And the White Witch is going to do awful, terrible things to them. So when Lucy, the youngest child of them all came into Narnia he let her go.
Now Lucy visited Mister Tumnus, the White Witch knows all about the secret fellowship between them.
The enchanted trees and shrubs blabbed it to the White Witch, who on her turn Mister Tumnus abducted.
Lucy was again in the land of Narnia, this time with her brother Edmund, by accident (they both dived into the wardrobe).
Lucy was looking for Mister Tumnus, but without any result.
Lucy drove Peter, Susan and Edmund to search for dear Mr. Tumnus. And that is how the story of Narnia begins.
Mr. Tumnus is the reason why the children are in Narnia, they are there to set him free.
So that’s the reason why I chose Mr. Tumnus for this task.
There’s in fact no main actor , there are four children who are in a world of imagination while the second world war was in gallop.
Lucy is the motive, Edmund incorporates it and Peter will follow.

Book Cover instruction
I had chosen the cover of a thinking lady, it has a lot of meanings.
It can be the witch in reflection.
It can be a lady who is wondering why the frozen forest is changing in spring (I like that part).
It can be the mother of the four children, who is missing them.
It can be Susan herself who is bored.
And I like this flexibility for the reader, and it is and always will be a children’s book. Use your imagination and you’ll see the cover as the most responsible cover of the Lion, the Witch and the Wardrobe.
Summary:
In the valley,
Beneath sea level, in a deep valley felt Aslan.
He fell and fell, meanwhile he was falling there was a deathly silence.
Everybody hold their breath, except of the White Witch, she was laughing.
They knows how deep the precipice was because Aslan was roaring loud and brave when he fell. And it stopped suddenly.
Their hearts where bouncing in their chests, and the perverted exercise of power raised.
Peter cried into the face of a wolf “ In name of Aslan, cancel the charm of Narnia “.
The Unicorns where fighting (which was very exclusive). And the nymphs where singing the enemy in a frenzy, the trees waved a storm.
For one styptic moment it looks like the earth had a break down.
But the struggle goes on nobody had a minute to lose. The nymphs never sang their song so hard as that night. The stars never glows so much as that night.
Mother nature was feeling it, until she gets pimples.
Softly came a paw over the edge, and a leg fallowed. A frozen sifting of a million hairs and a roar of a billion lion’s shattered into the battle.
Light bounced in the mirrors of ice. And there was Aslan, again!
Lucy was crying and screaming “ He survived, he survived! “.
Susan was giggling and the lights in her big brown eyes returned.
Edmund didn’t believed what he saw, this HAS to be magic. This HAS to be the true, so he stood up and fought as a man.
Peter took eight life’s, three ugly mermaids, two wolves, one evil devil and two barred fairies. Peter better don’t got a conscience.
Guardian angels in graceful dresses flows and skate on the ice field, the battle ground. Filing their nails with the sword of the witch.
Slowly was the foe getting weaker, and weaker. The ice was smelting underneath their feet, the blood wasn’t longer turning in pearls.
As weaker the enemy got, as stronger the side of the children was!
The moonlight increased, the trees became to be greener and greener and got flowers with a nice smell.
And Lucy was still holding her breath, and saw the battle trough her finger holes.
And the only bow, Susan has got was on target! There felt the deathly silence again. The trees stopped with waving and became to be green. Stars where look like they are laughing. And the ice field, was no longer cold. But a lake, in the most heavenly part of the forest. The witch was no longer ruling and murdering to much lives. She was (without her bow) locked up in a glass wardrobe!

Andere verslagen van "The lion, the witch and the wardrobe door C.S. Lewis"