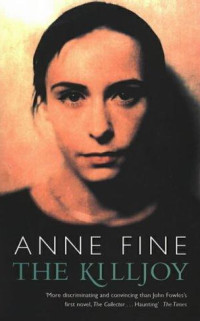 Summary:
A late afternoon seminar in the politics department of a Scottish university. A student is rambling on, and dry, deliberate Professor Laidlaw (age 49) twice tries to cut him short with one of his most characteristic phrases: ''Quite so. Quite so.'' On the second occasion, Laidlaw hears a tiny popping noise, and he realizes that another student, Alicia Anna Davie (aged 19), has got the giggles: ''There's not so much merriment goes on in Comparative Government II that I didn't notice.''
The best thing, Laidlaw decides, is to quell her with a question: ''I'm interested, Alicia, in your opinion of Stuart's wee point.'' (He is a great man for diminutives.) But when he greets her answer with yet another ''Quite so. Quite so,'' she explodes in uncontrollable laughter. He stares at her with delight; for the first time in years he knows what it is to be pleased by another human being.

His gratitude takes a strange form, however. After she has recovered herself, she smiles at him and he smiles back, carefully turning toward her the severely scarred side of his face - ''this ugly no-go area'' - that, like most other people, she has always done her best to avoid. Then he positively underlines his disfigurement, making his eyes rounder than usual, puffing up his bad cheek: ''I gave her the works.''
Perhaps, as he claims later, it was simply his way of cutting short a mood of happiness that he knew couldn't last, ''giving her a cue to withdraw.'' Perhaps. But when she cries out that he is a bully and slaps his face so hard that he nearly falls off his chair, he admits that she has done no more than he deserves. Quite so.
A giggle, a fit of laughter, a grimace, a slap - such are the beginnings from which a sinister duet starts to take shape. Laidlaw finds he is fascinated by Alicia in spite of himself, and in spite of her ignorance and complacency and her slatternly ways (so very different from his own well-ordered routines). He tries to draw back, but then gradually realizes that she is fascinated in her turn, that his ugliness arouses her. ''She liked my face. That was the root of it.''
''The Killjoy'' strikes a perverse note from its opening pages, and as Anne Fine charts the progress of Alicia's affair with Laidlaw - they are soon sleeping together - we move into even murkier psychosexual depths. The only justification for such a story lies in the telling: if it failed to carry artistic conviction the unpleasantness of the material would quickly rub off on the book itself. But Mrs. Fine never falters. You feel that every aspect of the drama has been thought through and fully imagined, that every detail belongs in its place.
Laidlaw narrates the story; to a large extent Laidlaw is the story. Some of his characteristics are apparent from the first - primness and precision, an acute but constricted intelligence, an all too readily indulged disdain for mediocrity (not that his reactions are necessarily off-target). Other qualities emerge more slowly - his meanness, his pathos, the matter-of-fact detachment that enables him to take his increasingly morbid behavior for granted, and that ultimately cancels out his self-knowledge.
Gradually, too, we piece together his past. He tells us at the outset that his scars were inflicted when he was mauled by a German shepherd at the age of 5, but it is not until we are well into the story that we start learning some other significant facts about his childhood, and not until near the end that we can gauge their full implications. Then there is his failed marriage; describing it, he reveals more than he intends.

With Alicia the situation is more complicated. We plainly have to allow something for the fact that we only see her through Laidlaw's eyes, and we are never offered as much insight into her motivations as we are into his. But within those limits, she is a consistent, firmly realized character, and most of what Laidlaw reports sounds as though it can be taken at face value.
He in fact becomes obsessed with finding out more about her, above all about the sexual fumblings and experiments for which there was no counterpart in his own lonely adolescence. Her revelations are meager and commonplace, but her ordinariness and ''her negligible qualities of soul'' are precisely what excite him, and seem to hold out the promise of redemption.
It comes as a shock to realize that in its twisted way ''The Killjoy'' is a love story, that we are in the presence of baffled affections and potential tenderness. But it would be sentimental to make too much of this, and Mrs. Fine doesn't fall into the trap. The emotional damage Laidlaw has suffered goes too deep; the games of interrogation he plays with Alicia are also acts of intimidation, and from the moment he starts prying in earnest he can sense what he thinks of as an ''adder'' stirring inside him, ready to strike.
Eventually he decides to push Alicia out of his life. He proceeds on the assumption that masochists are peculiarly sensitive to slights to their dignity - ''They don't spend all that time flirting with shame and self-abasement for nothing.'' And as he starts putting his plan into action, the tension is enough to make your toes curl.
''The Killjoy'' is a remarkably assured performance - all the more so, given that it is a first novel. My one serious doubt is whether it wasn't a mistake to furnish Laidlaw with literal scars rather than purely psychological ones. But the story is so powerful, and so well written, that while you are actually reading it any such misgivings are soon laid to rest.
The Scottish atmosphere is a distinct bonus, incidentally. Robert Louis Stevenson would have been at home with Laidlaw's mixture of the fussy and the macabre; so for that matter would the early Muriel Spark.