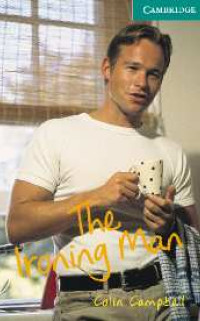 It’s a problem book, and it has intricate story, but it was a bit romantic. Of the and.

The title of the book are ‘The Ironing Man’ whats the ironing man means. The gay became by Marina drop for ironing.

Characters
Marina:
Marina is a house woman that it boring village life sick of it is.
She find it very boring drop a bit alone at home to sitting while Tom on he’s work is.
The nices kanten from Marina are that she Tom right now forgift als he telling what’s happend. Had that he a detective inswitch had because he her not confindence.

Tom:
Tom is Marina’s husband, that from lijstjes make loved.
He works in Londen and neglect Marina a bit

Tracy:
Tracy was the woman that Marina became massage on the job from the ironing man and that door Fhill, the ditective, for Marina was seeing..

Phill:
Phill is the man that door Tom was narrow drop to ontdekken what Marina’s did because he not at home.

Place and time
The books plays on a house in a little village Felton, near Cambridge ( p.10 ‘ They now…. Nowhere land’ ) She had no friends on the village and work aren’t there. Everyone was older than they were.(p.12 ‘’They had…they were.’’)
the story plays in this time because:

it’s plays in our time.
The story plays on Felton, nearly Cambridge. On England.
On the home from Marina and Tom.

Opinion
This book is a not funny book. It’s not nice. I found it very boring because, there was any tension. There happend nothing. What i like. And thats a bit boring. I likes more romans.

Summary
The book is about Marina. She is a woman. A real housewife and her husband Tom Works in London.
Marina and Tom left on a small village. Marina wished someone that did her ironing Works and other housework things to do.
Marina don’t like ironing, but she do a most! the doorbell rings. She did the door open and there was he! A very nice and beautiful man. Wearing a jeans and a white t-shirt and he says, i’m doing your ironing work. That did you wish?
Tom became home and Marina told him about the ironing man.
Marina told him to that she tueseday going to London to meed a friend. She fhoned.
But she don’t going to her. Tom’s thought that she lying. And leased a detective for found out whats the true story.
Marina sat at home and think and the doorbell rings. There stood a woman for the door. She sad that she became her massage. That was work of the ironing man. Tracy was her name. Tracy had a masage from the Ironing man. For Marina. Marina must to go on 2 o’clock in the National Gallery in London been.
The Detective thought that Marina with the weard man gone, and fallow them.
Marina had 3 wishes and it was 4 wishes. All the wishes come true. He said that he busy of it. the detective told Tom whats happend. Tom was down. He don’t like that.
The detective had a envelop gived whit picture in it. on the picture’s are the wrong person
Marina are going not weard.. Tom was happy. The detecrive to.
Tom and Marina are going on holiday. On the paper are atrikel from a vacante to west India. Later.. Had Tom the journy geboekt. And ask free from he’s work.and faired.
He did his mobile to wash down door the toilet.
Tom and Marina are on holiday for one week. They were happy and in love. They are on Barbados. Thet walked nearly the beach.