The Hound of the Baskervilles door Arthur Conan Doyle 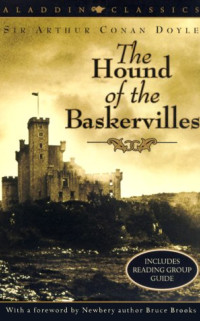 Author.
Arthur Conan Doyle was born on May 22, 1859, in Edinburgh and educated at Stonyhurst College and the University of Edinburgh. From 1882 to 1890 he practiced medicine in Southsea, England. Conan Doyle was so immediately successful in his literary career that approximately five years later he abandoned his medical practice to devote his entire time to writing.
Conan Doyle, like the detective he created, helped the police solve murder cases. He was knighted in 1902. The title fits perfect by the author. He died on July 3, 1930 .


Number of pages.
‘The hound of the Baskervilles’ has 174 pages.

Date of Publication.
First published in: 1902.

Genre.
The genre of the book is mystery/horror and 'A detective story'.

Setting (place/time).
Place : First in London; and afterwards in and near Baskerville Hall (A gloomy estate on the Devonshire Moors).
Time and atmosphere : Victorian atmosphere. Lots of fogs. And a hansom cab.
Sitting important : Yes, because the landscape contains, rocky fields and dangerous marshes.

Describe one of the main characters.
Sir Hugo Baskerville. He is a wild, evil and cruel man, the owner of the Baskerville house. He like the daughter of a farmer and kidnapped her. And he drank a lot.

Say what you think about this person and why.
I think that he is an evil man like I just said. Because he kidnapped a girl. And when you are a nice man you don’t do that things.

Theme.
I think it’s a mystery and horror book. Because the dog is scary, and on the cover you can see that his eyes and mouth glow’s. An example because of the horror: ‘Every now and then he looked behind him, like a frightened man. ‘Watson !’cried Holmes. ‘It’s coming.’ . When you read that you just know that it’s scary, because you want to now what is coming ! And it is a mystery story because they need to figure out what’s going on and that is mystery.

What did or didn’t you like about this book?
I like this book because it’s a scary book, usually I don’t like this sort of books but now I do! An example : "If you value your life keep away from the moor." , that is pretty scary ! And I like mystery and detective!

What did you find difficult?
Sometimes I just don’t understand the book. Because there are difficult words like habits (gewoontes) and parchment (perkament). I don’t knew them before. And there are other difficult words, but when I read the whole sentence, I got the word sometimes.