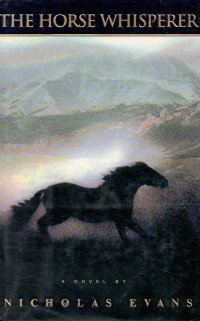 The author is Nicholas Evans. The book is published in 1995 in Great Britain. The publisher is Bantam Press, a division of Transworld Publishers.

Nicholas Evans, born at 26 July 1950 in Bromsgrove Worcestershire, is a journalist, television screenwriter, filmproducer and novelist. Beforse studying journalism at Oxford University he served in Africa with the charity Voluntary Service Overseas. Now he lives in Devon with his wife Charlotte Gordon Cumming, who’s a singer/songwriter. Determined by the New York Times, “The Horse Whisperer” was No. 10 on the list of bestselling novels in the United States for 1995. In 2003 “The Horse Whisperer”was listed on BBC’s Big Read. In 1998 this book whas made into a motion picture, directed by Robert Redford. Evans has revealed on his personal website that he has agreed an option to make a movie of his third novel “The Smoke Jumper”.

Grace Maclean: she’s the daughter and she thinks that it’s her fault that her best friend Judith and her horse Gulliver are dead. The relationship with her mother isn’t good because Grace blames herself for all the problems she and her parents go into.

Annie: Grace’s mother, after Grace’s accident Annie blames herself for what has happened. That’s the reason the relationship between Grace and her isn’t good at all. At the ranch she feels attracted to Tom, he brings her and Grace back together.

Tom Booker: The horse whisperer, he’s is a silent man. He heals Pilgrim with his knowledge, he knows everything about horses. Tom also feels something for Annie.

The message of this book is ‘when you do it because you love someone, there always will be a way’. In every person in this book that message returns. For example, Annie, she goes al the way to Montana with Grace and Pilgrim because she wants grace tob e happy again.

The story is about Grace Maclean, a girl who lives with her parents in Chatham, upstate New York. On a freezing snow-covered morning Grace and her best friend Judith go out for a ride and together with their horses they get involved in a terrible accident. They were slipping down a descent, towards a road. On that road they run into a 40-ton truck. Judith and her horse Gulliver got killed. Grace lost her right leg and her horse Pilgrim is extremely traumatized and uncontrollable.

Annie starts looking for something that can cure Pilgrim and finds an article in the library about “horse whisperers”. These people are able to communicate with horses and help them with their fears. Annie got in contact with a horse whisperer man called Tom Booker. Tom comes over to see Pilgrim and left angry, he tells Annie that this horse should have been dead. But she feels that when she got Pilgrim destroyed, something in Grace will die to. Annie decides to travel the continent with Grace and Pilgrim to see Tom again. Tom finally agrees to work with Pilgrim, but Grace has to be present by every session.


When Grace comes back from New York for a new prosthesis she finds out that Tom and her mom are having an affair. She is furious and so she took Pilgrim out and went for a ride. She ends up in the middle of a herd of  wild Mustangs. The Mustang stallion wants to fight with Pilgrim. There Tom came in and protected Grace and Pilgrim. He deliberately confronting the stallion, he’s fatally trampled. After that, Annie, Grace and Pilgrim returned to New York to rebuild their lives. When Annie finds out she is pragnant, her husband Robert and her got divorced. Annie gave birth to a little boy who just looks like Tom.

I really liked the book because I like horses very much. During the reading I felt like I really understood the thoughts of Tom and the horses. The writer described every detail very well. I think I also liked it so much because I’m very interessted in the whole ‘horse whisperer’ idea and the way they work. Because yes, these ‘horse whisperers’ do actually exist. One of the best known is Monty Roberts. Even here in the Netherlands there is one for as far as I know, Emiel Voest, I have seen him working in real life. That’s the mean reason why I liked this book so much and I also have seen the film. It’s amazing.