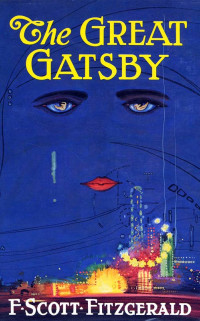 Meld je aan!
Title: The Great Gatsby
Author: F. Scott Fitzgerald
Written in: 1926
Number of pages: 144 pages
Setting and time:
The story takes place in America, near New York, and the events happen around the same time the book is written (a few years after World War I). In the book a few months pass by.
Characters:
Nick Carraway - The novel’s narrator, Nick is a young man from Minnesota who, after being educated at Yale and fighting in World War I, goes to New York City to learn the bond business. Honest, tolerant, and inclined to reserve judgement, Nick often serves as a confidant for those with troubling secrets. After moving to West Egg, a fictional area of Long Island that is home to the newly rich, Nick quickly befriends his next-door neighbour, the mysterious Jay Gatsby. As Daisy Buchanan’s cousin, he rekindles the romance between her and Gatsby. “The Great Gatsby” is told entirely through Nick’s eyes; his thoughts and perceptions shape and colour the story.
Jay Gatsby - The title character and main character of the novel, Gatsby is a fabulously wealthy young man living in a Gothic mansion in West Egg. He is famous for the lavish parties he throws every Saturday night, but no one knows where he comes from, what he does, or how he made his fortune. As the novel progresses, Nick learns that Gatsby was born James Gatz on a farm in North Dakota; working for a millionaire made him dedicate his life to the achievement of wealth. When he met Daisy while training to be an officer in Louisville, he fell in love with her. Nick also learns that Gatsby made his fortune through criminal activity, as he was willing to do anything to gain the social position he thought necessary to win Daisy. Nick views Gatsby as a deeply flawed man, dishonest and vulgar, whose extraordinary optimism and power to transform his dreams into reality make him “great” nonetheless. Daisy Buchanan - Nick’s cousin, and the woman Gatsby loves. As a young woman in Louisville before the war, Daisy was courted by a number of officers, including Gatsby. She fell in love with Gatsby and promised to wait for him. However, Daisy had a deep need to be loved, and when a wealthy, powerful young man named Tom Buchanan asked her to marry him, Daisy decided not to wait for Gatsby after all. Daisy lives with Tom across from Gatsby in the fashionable East Egg district of Long Island. She is sardonic and somewhat cynical, and behaves superficially to mask her pain at her husband’s constant infidelity.

Literal culture:
“The Great Gatsby” serves as a bridge between World War I and the Great Depression of the early 1930's. Although Fitzgerald was an avid participant in the stereotypical "Roaring Twenties" lifestyle of wild partying and bootleg liquor, he was also an astute critic of his time period. The story is a highly symbolic meditation on 1920s America as a whole, in particular the disintegration of the American dream in an era of unprecedented prosperity and material excess. Fitzgerald portrays the 1920s as an era of decayed social and moral values, evidenced in its overarching cynicism, greed, and empty pursuit of pleasure. The reckless jubilance that led to decadent parties and wild jazz music- epitomized in “The Great Gatsby” by the opulent parties that Gatsby throws every Saturday night- resulted ultimately in the corruption of the American dream, as the unrestrained desire for money and pleasure surpassed more noble goals.
Flashbacks:
The story is told with flashbacks.
Most important part of the book:
The most important book for me is when Nick Carraway is left to organize the funeral of Gatsby and has to face the fact that hardly nobody appears at the funeral, not even Daisy (and also not all the people who went to Gatsby’s parties). He’s very disappointed. Gatsby’s father comes to the funeral, and so Nick gets the last pieces of information about Gatsby. After the funeral Nick reflects that just as Gatsby’s dream of Daisy was corrupted by money and dishonesty, the American dream of happiness and individualism has disintegrated into the mere pursuit of wealth. Though Gatsby’s power to transform his dreams into reality is what makes him “great,” Nick reflects that the era of dreaming- both Gatsby’s dream and the American dream- is over.
Own opinion:
I find it hard to conclude if I felt sympathy or antipathy for Gatsby, because I don’t have a really good picture of Gatsby and his feelings or emotions. You just see him through the eyes of Nick and his character is coloured by the thoughts of Nick about him. But I have to say that I find the things that happen to him very sad. He’s so in love with a woman who is after all so detached and not fair to him. Besides all the radical themes the book has, it’s also just a simple love story, about a man who is hopelessly in love with a woman who at the end has not any feeling of difficulty to reject him in a rude way. It was not difficult to read the book. Actually it exceeds my expectations. Because it’s a book that is written during the 20s I thought it would be hard to understand the way of writing or something of the sort, but it wasn’t.

Title explanation:
The title of this book is “The great Gatsby”. The title refers to one of the narrator’s neighbours: Mister Jay Gatsby. Gatsby lives in the most expensive villa on West Egg and regularly throws huge parties. The many people at his house make Nick believe he must be an important man. He also transformed his dream to get rich, and not to be poor anymore. That makes him great. It’s comic that at the end nothing of his greatness seems to be left: he doesn’t get a big funeral or something.
Own opinion:
I think it’s a nice book and I enjoyed reading it. Especially when you have to read a book written before 1940, this book is a good choice. You don’t always find a book that is both this easy to read and amusing.
Summary:
Nick Carraway grew up in the Midwestern United States and went to school at Yale University. After this, he was stationed in France during World War I. Returning home after travelling a great deal, he is discontent and decides to move to the East at the beginning of the Summer of 1922, renting a ramshackle house in Long Island's West Egg section. He begins working in nearby New York City as a bondsman and it is here that his story begins. Jay Gatsby is a wealthy neighbour living next door in a lavish mansion where he holds many extravagant weekend parties. His name is mentioned while Nick is visiting a relative, Daisy, living in the East Egg section on the other side of Long Island with her millionaire husband, Tom Buchanan. As it turns out, Jay Gatsby had met Daisy five years before while in the military and was rejected by her due to his lack of wealth and because he had been sent so far away in Europe for the war. Daisy was attracted by Tom's riches and his distinguished family background and married him. Meanwhile Gatsby spent all of his effort after the war to buy his mansion through shady business dealings in order to be nearer to Daisy in the hope that she would leave Tom for him. Nick is chosen to be the "matchmaker" and arranges a reunion for the two at his home. Daisy is impressed by Gatsby's wealth and the two begin spending much time together, raising the suspicions of Tom who had also upset Daisy by carrying on an affair with a gas station owner's wife, Myrtle Wilson. While in a New York City hotel room one evening late in the summer with Jordan (a friend of Daisy), Nick, Daisy, Tom, and Gatsby, there is a massive confrontation during which Tom exposes Gatsby's corrupt business dealings. Jay and Daisy leave to drive back to Long Island together with her driving Gatsby's car "to calm her down" until she accidentally hits and kills Tom's mistress running out in front of the gas station after her own jealous husband had locked her inside. The car doesn't stop after the accident and speeds on towards Long Island. Gatsby's charm has faded with his exposed corruption while Tom refocuses on Daisy since his mistress has been killed, assuming Gatsby to have been the car's driver. Nick is disgusted by this entire mess of love affairs and even ignores Jordan (with whom he had a sort of relationship), worried about Gatsby since he continues to yearn for Daisy even though it is clear that he has failed. While Nick goes off to work in New York City the next day, the dead woman's vengeful husband, assuming Gatsby to have been driving his car that night and told that it had been Gatsby's car by a vengeful Tom Buchanan, shoots Gatsby to death in Gatsby’s swimming pool and then kills himself. Gatsby's funeral has few in attendance aside from Nick Carraway and Jay's father who has come all the way from the Midwest where Jay grew up. Disgusted that so few had come, including Tom and Daisy who had abruptly moved away, and the hundreds who had attended Gatsby's parties, Nick distances himself from Jordan for good. Finally, tired of this gross scene of wealth and pettiness, he moves back home to the Midwest. His fond memories of the East remain only of Gatsby, and it is for him that this story is told.