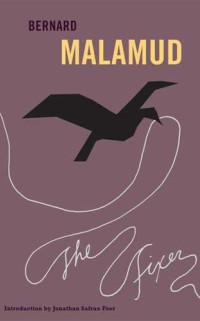 This book is a historical novel about a Jew in Kiev who has to hold on. If he admits that he has murdered a Russian boy, all Jews in Kiev will be accused.

Yakov Bok (30) lives in a little village. But when his wife deserts him, he decides to go to Kiev, to find a better life. He is a fixer, a job which does not pay very well, although he is very handy.
He is intelligent, but he has never got the chance to learn. He is not a religious Jew, but in prison he gets the New Testament and he likes the stories about Jesus. But he does not understand why the Christians keep him in prison, although they know very well that he is innocent, just as Jesus was.


There is not a character I really like. There are many bad characters, so there are not many possibilities. But I don't like Yakov Bok; I don't recognize things of him in me. He is strange. For example: when he gets money (during his job) first he buys books, but after a little time he sells them and goes back to a sober life. I thought: these books do you need to learn how to behave like a Russian.

The novel takes place in Kiev, about the year 1910/ 1911. Tsar Nicolas II is an anti-semit and will not help Yakov. I'm sure about it, because it's written on the backside of the novel. Yakov is about three years imprisonment.

In the beginning it is very boring. It takes many pages before Yakov is in Kiev. When you know that Yakov Bok symbolises Jesus and his wife Raisl Israel then you will see a lot more. I have learned that Christians in that time were wrong about the Jews and I feel sorry for that.

To be honest: I would not say to others that they have to read this book. The end of the book is very strange, for me it was an anticlimax.

Summary:
Yakov Bok goes to Kiev to get a better life. He gets a good job, but he is not allowed to be in that part of the city. Then a dead body of a Russian boy is found. Yakov gets arrested and imprisoned without an indictment. Bibikov is the only one who wants to help him. The mother of the boy lies, for the murderer could also be her blind ex-lover. She had made him blind, so he could have done this to get revenge.
Yakov does not sign a form, because if he should, he should confess. First he is in a cell with many others, but when they find out that he has written a letter, he is brought to another cell, where he is alone. Bibikov is murdered, so Yakov has not any help.

Many times Yakov is sick, ill and very hungry. They care that he will not get dead, but that is all. Suddenly Shmuel comes to visit and Yakov asks him for help. But that visit was not allowed, therefore Yakov is chained. Once he meets Raisl. She wants him to sign a form, so that he is the father of her son, Chaim (but it is not possible that he is the real father).
Yakov gets a new lawyer Suslov Smirnov and he thinks they still have got a chance. Some days later the guard tells the trial is about to start. In the night before the trial, he has a dream where he sees all dead people: Bibikov, Zhenia, Shmuel. The next day when they are ready to go, the master guard wants to search Yakov again and he has to take off all his clothes. Kogin (another guard) says Yakov has been through enough. So the head warden kills Kogin. Yakov is driven to Courthouse, in a carriage of the Cassocks. It's crowded on the street. A bomb is thrown at the carriage that wounds one Cossack. Yakov imagines killing Tsar Nicholas II. He is a hero now.