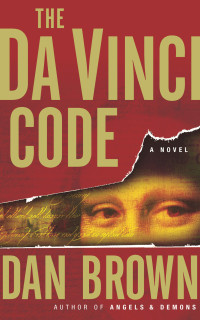 The story begins with Robert Langdon. He is a professor of religious iconology at Harvard University. He is in Paris to give some lectures.
That night, its late and Robert is in bed already, he receives a visit from lieutenant Collet. He claims he needs Roberts help on a case.
Robert decides to go with him and he is taken to the famous Louvre Museum, where he meets captain Bezu Fache. Bezu walks him through the museum and then shows him a body. Robert recognizes Jacques Sauniere, the famous Louvre curator. Robert was suppose to meet him earlier that night, but Sauniere never showed up. Now Robert knew why.
But his body lay there in the strangest position.

He was totally naked and his arms and legs were sprawled outward. He had used his own blood as ink and painted pentacles on his body. Pentacles, just like the position of his naked body.

But what Bezu didnt told Langdon, was that Sauniere wrote Langdons name on the floor. This makes Robert Langdon most important suspect.
Luckily, Sophie Neveu helps Robert. She is a cryptologist, and far more important, Saunieres granddaughter. Together they mislead Fache, what gives him a little bit more time to take a look at all the clues Sauniere left for them. They lead them Da Vinci's Mona Lisa, his Madonna of the Rocks, and finally lead him to a key. It looks like a key of a swedish bank.

Langdon and Sophie escape the Louvre. Langdon comes to the conclusion that Sophies granddad must be a member of the Priory of Siona, a secret society that protects the secret of the Holy Grail, until its time to reveal it.
The key takes them to a Swiss bank, where they take, with a lot of trouble, a wooden box with a crytex in it, with them.
Sophie knows crytexes very well, her grandfather used to make them for her. You have to fill in a word, to keep the inside information undamaged. If you try to break it with force, it will break and vinegar will destroy the inside information.

With the police chasing them they fled to Leigh Teabing, a friend of Robert and an expert on the secret of the Holy Grail and the Priory of Sion.
Leigh tells Sophie, who isnt familiar with the legend of the Holy Grail, the truth about the Prior of Sion and the story of Jesus.

It is a long, and very interesting story. It shows Jesus as a man, and not a God. According to the story Jesus and Mary Magdalene were married, and even had children. Teabing shows Sophie a painting of the Last Supper, by Leonardo da Vinci (also a Priory member). It sows that the person sitting on Jesus left, isnt a man at all. It is a woman very clearly, it is Mary Magdalene. The Catholic Church made her person a whore in the bible, because Jesus had to be a divine person, and he couldnt have mortal characteristics, like falling in love.
The grail actually isnt a cup or a thing; it is a person, a symbol for the secret feminine. The grail is the tomb of Mary Magdalene.

Leigh isnt even finished with his story when they have to leave again. The cops are surrounding the house and a mysterious albino monk already attacked them.

With Leighs private jet they take off to London, where they will be saver, and where the Holy Grail should be according to the legend.

London doesnt turn out to be much saver. Leighs manservant Remi, who came along with them, turns out to be a traitor and kidnappers Leigh.
Sophie and Robert want to get him back, but try to do that by solving the cryptex.
It leads them to Westminster Abbey, to the tomb of Sir Isaac Newton, also a Priory member.
They find a note their, that says to meet Leighs kidnapper somewhere else in the abbey.

Sophie and Robert decide to go there and find Leigh there, aiming a gun a them and telling them to hand over the cryptex. Sophie and Robert are shocked. Leigh is the traitor?
Leigh is convinced the truth about the grail must be shared with the world now, and he is willing to go very far to reach that goal.
Luckily Robert and Sophie can escape Leigh and the police catch Leigh. They had come to the conclusion that Robert wasnt guilty after all.

Robert and Sophie go to the Roslyn Chapel, where the grail is suppose to be. Sophie has the feeling she had been there before. They meet a tourguide there who tells Sophie he has the exact same wooden box. Sophie says that is impossible because her granddad made it himself.
Sophie and the tour guide find out that something strange is going on. They both lost their parents and sibling in a car crash when they were very young. The only differences is that Sophie also lost her grandma, and spend her childhood with her granddad, and that the tour guide lost his grandfather and was brought up by his grandmother.
This cant be coincidence, they are brother and sister.¦

They go to his grandmothers house and his grandmother immediately recognizes Sophie. She calls her princess, just like her grandfather used to call her.

Sophie finds out the truth about her family. Her mother and father where both from Merovignian families, families that carry the royal bloodline of Christ. Her parents were killed by a car accident. But Sophie, her brother and grandparents were supposed to be in that car to that same day; only they changed their plans, just before they left.
Sophies grandparents now this is a threat to the Priory of Sion, they both were members of, and Sauniere even was the Grand Master. They decide to part the family.

Sophie feels at home and is very happy that she finally knows the truth about her family, but they still dont know where the Holy Grail is, and Robert finds that difficult.
He talks about it with Marie, Sophies grandmother, but she tells him to let it rest and that that it will come to him someday.

Weeks later Robert wakes up. He suddenly has the feeling he knows the truth. But can it be so simple?
The final riddle Sauniere left them was:
The Holy Grail neath ancient Roslin waits.
The blade and chalice guarding Her gates.
Adorned in masters loving art, She lies.
She rests at last beneath the starry skies.
Robert finally understands. Roslina is an old word for Rose Line: The earths original prime meridian, the first zero longitude of the world, Pariss ancient Rose Line.
It leads Robert through Paris Rue de Rivoli and finally to the Louvre Pyramide. He enters the Louvre and the long tunnel that leads him to La Pyramide Inversee.
Robert realizes he is standing beneath the ancient Rose Line, surrounded by the works of masters. What better place for Sauniere to keep watch? He raised his eyes to heaven, and could see a beautiful sky filled with stars through the glass. She rests at last beneath the starry skies.
Robert understands the secret. The quest for the Holy Grail is the quest to kneel down before the bones of Mary Magdalene.
Robert Langdon fell to his knees.