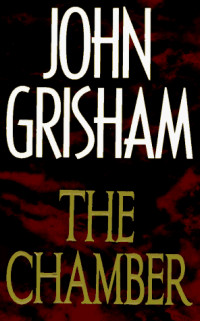 - Main character:
The main character in this story is Sam Cayhall. He’s been found guilty of murder on a Jewish family. But actually he didn’t kill the Jewish family but someone else did. Sam Cayhall’s friend, Rollie Wedge was the person who made the bomb and placed it in the office of the Jewish family. Rollie Wedge didn’t go to jail, Sam Cayhall did. Sam Cayhall doesn’t talk about anything because he hates lawyers. He hadn’t told anyone that Rollie Wedge was the guilty one. One day a new lawyer (Adam Hall) went to visit Sam Cayhall. What Sam didn’t know was that this lawyer was his grandson. After a half an hour Sam found out that Adam was he’s grandson. Adam tells a lot about their family. Sam had four weeks before he gets executed. So Adam tries almost everything to do about it, that he wouldn’t be executed. But all Adam’s appeals for Sam had been denied. So at the end of the book Sam had to go in the gas chamber. “I'll die a very proud man, son, because of you” these wore the last words Sam Cayhall said to his grandson before he got executed.

- Personal opinion:
My personal opinion about this book is that I’ve found it a very interesting book, because it’s a realistic story. I felt like I was a character of the book. It was really nice to read the book, because normally I don’t like to read books. But if the story of another book is as good as the story of this book I would like to read it. The book also made me thinking about executions and how they must abolish them in America. How cruel people sometimes can be.


2) Writing task
What did I learn about the culture/the country where the story plays?
In 1964, the state Mississippi executed people in the gas chamber. Mississippi was the only state in America who didn’t executed people with an injection. Now twelve states and federal districts Puerto Rico and Washington have abolished the execution. In the other 38 states is it possible to get an execution, six from these state haven’t done an execution anymore since 1976.

I’ve chosen a poem for the creative part.

Time moves quickly
When it’s all that is left.
And all that remains:
The accusations of flesh and spirit