The catcher in the rye door J.D. Salinger

The Catcher in the Rye is the ultimate novel for disaffected youth, but it's relevant to all ages. The story is told by Holden Caulfield, a seventeen- year-old dropout who has just been kicked out of his fourth school. Throughout, Holden dissects the 'phony' aspects of society, and the 'phonies' themselves: the headmaster whose affability depends o…

The Catcher in the Rye is the ultimate novel for disaffected youth, but it's relevant to all ages. The story is told by Holden Caulfield, a seventeen- year-old dropout who has …

The Catcher in the Rye is the ultimate novel for disaffected youth, but it's relevant to all ages. The story is told by Holden Caulfield, a seventeen- year-old dropout who has just been kicked out of his fourth school. Throughout, Holden dissects the 'phony' aspects of society, and the 'phonies' themselves: the headmaster whose affability depends on the wealth of the parents, his roommate who scores with girls using sickly-sweet affection. 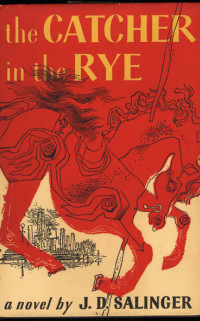 Main characters:
Holden Caulfield: Sixteen-year-old, skinny boy. He wants to be grown up. He comes more and more confused in the book.
Phoebe Caulfield: Holden’s sister. She’s very smart and wants to come with Holden, because she likes her brother.

Explain title:
The main character, Holden Caulfield, explains himself what is meant with the title. He liked the idea of catching and saving the children in the rye from the cliff, where they fall into the grown up world. It refers to a poem.

Summary:
Holden Caulfield was sixteen years old and he went to Pencey. That was a boarding school. It was not the first school he went to. He had been kicked out of many schools before. And now he was kicked out of Pencey too, because he had low marks. But now he was still at Pencey. It was almost Christmas and he was supposed to go home, but he decided to go to New York first. He packed his stuff at night, after he and his roommate, Stradlater, had a fight. He took the train and went to New York. In the train he met a woman who was the mother of some jerk he know at Pencey. He lied to her that her son was very honest and good at school. The truth of course was different from that. In New York, he went to a hotel with a taxi. It was the Edmond Hotel. First he went to the Lavender Room, but that closed too early and he couldn’t get liquor, so he went to Ernie’s club. A club he once went to with his brother D.B.. There he could get liquor. He danced with a blonde girl. Although, she was only interested in parties and famous persons who could pass by. When Holden went back to the hotel room, the elevator boy asked him if he was interested in a whore. Because Holden was so depressed of the night, he said he wanted a whore. He hadn’t lost his virginity yet and he didn’t like that. Although, he was too nervous and he didn’t do it with the whore. He paid her five bucks, but the whore, named Sunny, said that he had to pay ten bucks.

She went, but she came back with the elevatorboy. He hit Holden and stole his money.
The morning after, he gave Sally, his formal girlfriend, a call and they went seeing a theater-show at two 'o clock. They spent the whole afternoon together and after the show they went ice-skating. Later, in a bar, he told her he wanted to go to the woods with her and get a job so that they can merry each other. He was really serious. Sally didn't want to go and he called her a 'serious pain in the ass'. She ran away and left Holden alone in the bar. He felt really lonely.
He met an old school friend, Carl Luce. They had a drink together in a bar downtown, but they got into a fight, so Carl left. Holden stayed and drank too much. After that, we went to the lake in the Central Park, where he wondered where the ducks were.
When he was concious again, he decided to see his sister Phoebe. They had a very good conversation, but Holden had to sneak out, because his parents came home.
After that, we went to mr. Antolini, good friend and old teacher of Holden. Holden told the man the whole story and mr. Antolini said Holden could sleep over at his house. But when Holden woke up, he felt mr. Antolini touching him. He ran away.
He decided to run away and wanted to write Phoebe a letter. He wrote in the letter that he wanted to flee to the west and that she had to come to the park after school. When they met each other in the park, Phoebe carried her suitcases with her, because she wanted to go with Holden. Holden didn’t like that idea and they argued about it. Finally, Holden himself didn’t like the idea of leaving and they went home together.

Theme:
The theme is ‘growing up’. Holden really wanted to live in the grown up world, but he found out that world wasn’t always honest and fair. He had to deal with that and that was difficult for him, because he himself wasn’t grown up yet.


Personal opinion:
I didn’t like this story, because is has no real plot, only some happenings from Holden, which aren’t really interesting themselves. You just follow him a few days and that’s all.