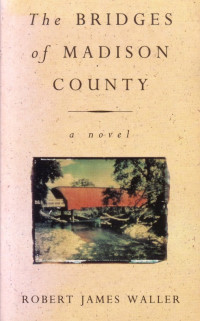 Every year with her birthday, Francesca gave a look on the stuff of Robert Kincaid. He died and sent a medallion and a letter to Francesca. Francesca met Robert when he wanted to know where the Roseman Bridge was. Robert was a photographer for National Geographic. Francesca showed him the bridge and she asked if he wanted to stay with dinner. Robert did. They talked a lot about all kind of topics. Francesca was married and her husband and children were not at home for a week. Her husband was named Richard. First Francesca was a schoolteacher but later she was a full farmer’s wife. Robert asked her if she want to watch him taking photos. She did and they spend more time with each other. They sat in the kitchen and there was a love song on the radio. They danced and just a short time later they kissed and made love. Then it was time that her husband came back and Francesca had to make a decision about what she wants. But she couldn’t leave her family, Richard and the children so she decided that she stayed at the farm. Robert leave but she could never let him go, she thought much about him. Robert took a picture of Francesca. He believed that he sent her the picture. She saved the picture in her underwear closet, a place where Richard never could found the picture. Her husband died. She got a number from Robert but she never called but after her husband died she called to the number. The girl who was answer the telephone said that Robert leave National Geographic. She gave her a different number but it was the same number that was already written on the paper. She never tried again. But then she received a parcel with a medallion, the cameras of Robert and a letter. Robert died.

The action does take place in Winterset, Iowa in the USA. The action takes place in the past because the story started in 1965. The love between Francesca and Robert takes place in one week. But the story ended in 1989. The writer passed over 20 years in the story. The narration is a 3rd person plural because the writer told the feelings of two people.


Robert Kincaid was the main character even as Francesca Johnson was. Robert was a hippy with long hair. He takes photos for his job as photographer for National Geographic. He was travelling a lot and he was a little shy.
Francesca was a farmer’s wife in Winterset. Before Francesca met Robert she was a little unfeminine. But she went shopping and Robert let feel her feminine. So she fell in love with him but she couldn’t leave her husband and children because in the little village she lived, everybody gossip and when she leave with Robert her children become bullied. That’s too hard for her.

No of the characters change or develop because Francesca didn’t want to leave and she stayed home with Richard and the children.

The genre of the story is: love story, because Robert and Francesca fell in love with each other.
The title means Robert had to take pictures of the bridges of Madison County. One bridge he couldn’t found and he asked Francesca.

My personal opinion: I like the book but some things in the story it was told too much about one thing. But the story was easy to understand and the genre was really beautiful!