In this classic thriller, Ira Levin imagines Dr Josef Mengele's nightmarish plot to restore the Third Reich. Alive and hiding in South America, thirty years after the end of the Second World War, Mengele gathers a group of former colleagues for a sinister project - the creation of the Fourth Reich. Ageing Nazi hunter Yakov Lieberman is informed of the plot but bef…

In this classic thriller, Ira Levin imagines Dr Josef Mengele's nightmarish plot to restore the Third Reich. Alive and hiding in South America, thirty years after the end of th…

In this classic thriller, Ira Levin imagines Dr Josef Mengele's nightmarish plot to restore the Third Reich. Alive and hiding in South America, thirty years after the end of the Second World War, Mengele gathers a group of former colleagues for a sinister project - the creation of the Fourth Reich. Ageing Nazi hunter Yakov Lieberman is informed of the plot but before he hears the evidence, his source is killed...

Spanning continents and inspired by true events, what follows is on... 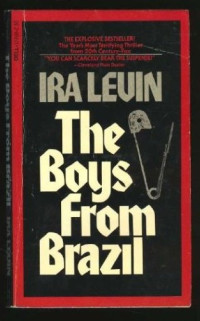 Luister nu!
Summary
The book The boys from Brazil starts in São Paulo 1974. A rich man, dressed in white, who names himself Aspiazua, and whose real name is Dr. Mengele, and two agressive-looking bodyguards checked in at the Japanese hotel.
Mengele arranged a meeting between some Nazi’s and tells them about a plan to kill 94, 65-year old, men in diferrent countries. At the end of the meeting he discovered that a waitress recorded the conversation for a man called Barry Koehler. But Mengele was too late, Barry had already made a phonecall to a journalist in Austria named Yakov Lieberman about the conversation, before he was killed by Dr. Mengele in the hotel.
At first Yakov Lieberman thinks that Barry is joking, but later he gives him a chance. He checks all the 65-year old men who are killed in that specified period. He also presents the information from Barry Koehler to a group of students in a conference and asks them what they think the reason is for Dr. Mengele to kill the 65-year old men.

Lieberman gets the list with the names of the 94 men. He visits the widow of man that was killed: Frau Döring and her son, but they can’t help him. Then Lieberman goes to the United States and is shocked when he meets another widow and her son. The son was exactly the same, and both woman were in the early fourties while their husbands were 65.
He found out that the boys were adopted 13 years ago by the agency of a German woman named Frieda Malony who was a guard at Ravensbruck concentrationcamp. She tells him that some thirteen years ago she had arranged adoptions of boy babies supplied by a German organisation in Brazil. Were Mengele succeeded in making mononuclear reproduction of human beings. The experiment must be to make replicas of Adolf Hitler. And the babies had to grow up under the same physical, mental and emotional conditions as Hitler. His dad died when he was 13, so the fathers of the adopted babies also had to die.
Mengele is infuriated when he hears that the bosses of his Nazi organisation have called the six men who had to kill the 94 people back. Because of the risk to the Nazis becoming too great as a result of Liebermann’s activities, Mengele disguises himself and travels to the United States, where he intends to kill Liebermann as well as the remaining victims on the list.
Because Liebermann realises that official action may take too long, he also contacts the Young Jewish Defenders, a militant organisation led by rabbi Gorin. They agree to meet at the house of Henry Wheelock, who is one of the people to be killed. But Mengele discovers Liebermann’s plans and gets there first. He first impersonates Liebermann and kils Wheelock, and then impersonates Wheelock when Liebermann arrives.
When Liebermann tries to escape, he is shot and wounded by Mengele, but he is saved by the return home of Wheelock’s son. Mengele tries to talk him over to his side, but the boy becomes convinced that Mengele is dangerous and sets his father’s murderous dogs on him.
Liebermann talks with Gorin about what they have to do with the little Hitlers. Gorin insists that they should all be killed to protect the world, but Liebermann thinks he can’t become a child-killer like Mengele. When his arguments fail to convince Gorin, he flushes the list of names through the toilet.
Setting
The story starts in São Paulo, Brazil in 1974 in a Japanese hotel. Dr. Mengele arranged a meeting there for a few Nazi’s. Mengele went to Brazil after the war so he couldn’t be punished.

Liebermann’s office is in Vienna, capital of Austria. Liebermann is gestspeaker in Heidelberg. And he goes to the United States to visit a widow and her son.
The story starts in September 1974, 30 years after the Second World War when the attention for dangerous ideas is decreased and the story ends in Wheelock’s house February 1975.
Character discriptions
Main characters:
Yakov Liebermann -> Yakov Liebermann is a 50 year old Jew who has his office in Austria. He’s a Nazi hunter and gives lectures in Universities and Synagoges. His wife died a couple years ago and he isn’t very healthy any more. He wants to spent the rest of his life on terracing Nazi’s because of his childhood in a concentrationcamp. Liebermann is a good person, he doesn’t want to kill the 94 boys because he doesn’t want to be like the Nazi’s
Dr. Josef Mengele -> Josef Mengele is also a rich man from 50 years old and an ex-nazi. He was the camp doctor of Auswitz in the war and did a lot of experiments with clones. He carries the dream that the third Reich must live again! The plan to get 94
Hitlers must be finished in his eyes so when the bosses called the six killers back, he goes alone to kill Liebermann and the remaining victims on the list. Mengele hates Liebermann because Liebermann is a Jew and a Nazi hunter.For Mengele evil doesn’t exist, he is an unscrupulous man: There’s only one good race: the Aryan Race and he kills everybody who doesn’t please him.
Other characters:
Barry Koehler, Klaus van Palmen, Rabbi Gorin, Mr. Wheelock, Beynon, Emil Döring. Ex-SS’ers: Farnbach, Traunsteiner, Hessen, Kleist, Mundt, Schwimmer
Theme
This book has three themes in my opinion:
First the fight between good versus evil. Of course Liebermann is the good person, he doesn’t want to kill the 94 young Hitlers while Mengele has murdered lots of people! In Mengele’s eyes evil doesn’t excist, only good (the Arian race) he kills everybody who isn’t perfect.
The second theme is the fact that the Third Reich must live again, that’s what the Ex-Nazi’s want, and to realise this, they create 94 new Hitlers.
The third theme in this book is the rising information concerning clones.
Language
The book is written in American Englisch, but the native language of most of the characters is German.
My opinion
I was very intrigued by the book from the beginning. I had a lot of questions when I kept reading, so I constantly read in the book. I was curious why the 94 men had to be killed.
It was a bizar story, 94 clones of Hitler, but it was written in a realistic manner. The characters were very clear, but probably a bit too contrasting, there was a good person (Liebermann) a bad (Mengele) and something in between (Rabbi Gorrin) and I knew from the beginning of the book, that Liebermann would survive.
Another negative point of the book was the fact that there were a lot of contingency situations like the meeting between Liebermann and mrs Döring.
But he book was easy to read, because it was written chronologically and we’re talking about the war in our history class for two years now, so the subject wasn’t difficult at all.