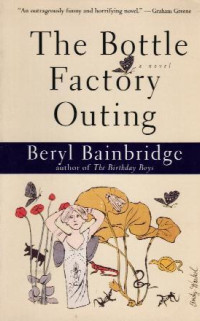 The autor is Beryl Bainbridge. The book is published in 1997 in Groningen. The publisher is Wolters Noordhoff. The book has 154 pages.

Brenda: She left herhusband in Yorkshire. She moved to London. In London she met Frede, they become friends. Brenda works in a bottle factory and she is very soft. She let things happen, even if she don’t want them to happen. Also she don’t say everything she thinks.

Freda: Freda is the best friend of Brenda, but she is her opposite. Freda also works in the bottle factory. She said everything that’s on her mind, but after the accident with Brenda’s mother-in-law she’s more quiet.

Rossi: He is the manager of the bottle factory and wants to touch Brenda. He has died Freda.

Vittorio: He also works in the bottle factory, he is a colleague of Brenda and Freda. Freda wants Vittorio to love her.

Freda and Brenda both work in a bottle factory, Rossi is the manager. The whole story takes place, the day they are going to Windsor Castle. The day of the bottle factory outing. Freda wants vittorio to love her, Brenda wants Rossi to stop touching her. Also that day, the found Freda dead, in the woods.

The most important theme is the lonelyness of Brenda. She has left her husband, Stanley, and she is lonely now. She met Freda and they are living togther because they don´t want to be alone. When Freda died, Brenda was alone again.

Brenda has left her husband Stanley in Yorkshire and moved to London. She works in a bottle factory, here she met her new friend Freda. They’re both alone so they decide to live together in the same house. Freda is in love with an Italien colleague, Vittorio. She wants him to love her. The manager of the bottle factory, Rossi, wants to touch Brenda and be with her all the time. Brenda didn’t want this, she’s trying to avoid him. But because she is afraid of losing her job, she said nothing.

Patrick, another colleague, and Vittorio came to the hous of Brenda and Freda. Brenda’s mother-in-law was also their, she wasn’t invited. She wants to shot Brenda, for all Brenda has done to her son, Stanley. She missed. The police arrived.

She misses and the police arrives. They wants to go out for a day, the bus didn’t arrive and they go by car to Windsor Castle. Freda hates Patrick from that day because she was alone with Vittorio and Patrick disturbs then. Freda and Brenda are fighting with each other and also are Vittorio and Rossi. Patrick was gone for a long time. When Freda is running into the wood, she didn’t came back. Brenda wants to find her and goes also in the wood. Brenda find Freda on the ground with a broken neck. They didn’t call the police, because it could be Patrick or Rossi. They put her into a barrel with sherry, which will be fall overboard at a boat. Then told Rossi what happened; he had want to touch her, she stepped back, felt and broke her neck. Brenda didn’t have any friends and no husband, she is alone again.

I didn’t like the book, it was a realy boring story. The story didn’t kept my attention. Also sometimes it was all a bit weird. For example, they didn’t call the police when they found Freda. I find that’s a bit strange, isn’t it?