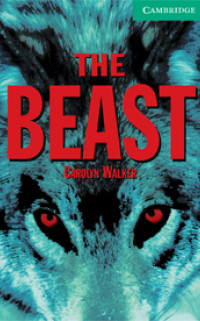 Title of the book: The Beast
Name of the author: Carolyn Walker

The story in a short version
The the story begin in London at Susie's apartment in West -. It was the end of September 1999th Susie and its man Charlie was overworked. Therefore they decided on holiday go. They went to South-Wales Llandafydd called in a borough. They had booked a maisonnette at cynghordy. people in the city said that them that house bewitch (behekst) were but Susie and Charlie knew that not. In the meantime told a farmer Toms called Lloyd that he had lost3 sheep that night therefore he decided to watch his sheeps that night so that he knew how the sheep are had disappeared. Because the day for that, he had found 3 dead sheep. Then that night he saw an enormous wolf on its sheep afrennen. He caught its gun and shot the animal in its hind leg. And the animal ran away. Then Susie at home were of its work could them not well sleep and them horde strange sounds. Them early Charlie or he downstairs wanted will look at what kind of sounds that exact were. Charlie called Susie to come to downstairs.
In the door opening lay a dead sheep without its tongue and the sheep had entirely torn open from its mouth to its tail. Strange was that the dead sheep did not bleed totally. The following morning had decided Susie and Charlie to go at a bar. When they went from the maisonnette that it saw them very hard snowed.


Them took the car then suddenly the car skidded Charlie tried slow down but was late. Them collided against a tree. Susie had nothing but Charlie's poor and leg had break. A farmer TOMs called Lloyd saw everything happening and he rang an ambulance and brought back Susie to the maisonnette. A couple days later Susie were kidnapped by werewolf. The werewolf brought its to an old house at brynmawre hill. She was unconscious. Then she awake became she was in the house of TOMs and Kathryn Lloyd. Toms ran along brynmawre hill and saw accidentally its lying and saw also the wolf, he shot the wolf with zilver ball(zilveren kogel) and a couple seconds later dropped down the animal he took along Susie to its house.

My opinion
the story was verry excided beacuse you didn’t know what was going to hapen in the next chapter I give these book a 7,5.