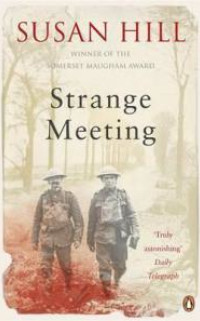 This story is about World War 1, it all begins at the house of John Hilliard. He wakes up and remembers all that happened in the hospital. He goes walking along the beach and then he goes to his sister Beth, for a talk. They’re talking about his leg, and returning back to the war and Beth tells him she probably is going to marry Henry Partington.
The next morning, John takes the train to London. There he buys some stuff at the Army and Navy stores. Then he picks the boat leading to Cherbourg. He hears here that his battalion is at a rest-camp. When they arrive at the rest-camp, Hilliard meets Barton and they become good friends. On a day Barton and Hilliard smell some fire. They’re going to look what it is, and they find a crashed German plane. Barton is shocked of it, but he says it’s all right.
Then they go up to the front line. There they get into an old building, where they get some sleep. At night, a shell came in and killed 9 men.

Then they go to the support trenches behind the front line. There is a dugout, which is reasonably comfortable. It’s still hot and dry there. Then Barton is decided to observe the enemy lines. Hilliard is told that they’re going up to the front line in a couple of days.
The trenches are filled with water because of the rain that hasn’t stopped for weeks. They’ve been in very low spirits and physically exhausted. Hilliard gets a letter from his sister Beth, which says that she’s going to marry Henry Partington. Then they get orders to spy the enemy lines, and Barton crawls just to far, and he got seen. Some men got shot, and Barton takes up that personally. Then they plan an attack on the Germans, Hilliard thinks it will not make sense, but Barton has an good spirit. The next morning it begins, but Hilliard gets into smoke. Then he got wounded and felt himself sinking into a whirl of blackness and silence. He woke up and then realised he must go back to the trenches. Then he gets again in the hospital, there he gets an letter of the Barton family. It says Barton probably died. When Hilliard comes out the hospital, he decides to visit the Bartons. That’s the end.