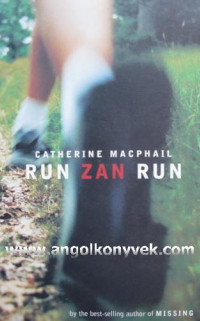 2) Summary:
Katie’s life is being made a misery by Ivy Toner and her two friends Michelle Thomson and Lindy Harkins, who have bullied her for a long time already. She waits for Katie every day, and sneaks up behind her at the times she doesn’t expect it.
One time Katie walks home over the town dump, a place where she was safe until now. But suddenly Ivy and her gang appear. But when they want to get Katie, suddenly a strange girl appears later known as Zan, and defeats Ivy and her gang.
The next day Katie comes back to the dump to thank Zan, and finally they become friends.

Katie finds out that Zan is homeless and lives in a cardboard box. Every time she asks why Zan is homeless, and why she has to move every time, she gets no respond.
Zan and Katie become good friends, but suddenly Zan moves to another place in town, and Katie doesn’t know where.

On Halloween eve, Katie walks to school alone to go to the Halloween party, and there are Ivy and her gang again. When she tries to push Katie off a wall (which would’ve killed Katie) Zan suddenly appears and fights the girls again. Katie is surprised and happy about this. Zan tells her that nobody can know about this. The next day there’s a rumour in the school that Katie beat Ivy and her gang, and everyone’s excited about it. But Katie can’t tell Zan did it, so she says she beat them. Lindy and Michelle start to think this too, because they didn’t see two girls, Ivy is the only one that doesn’t believe Katie can change into Zan, and she is definitely going to prove that.

Katie’s father has heard about all the homeless people in the town, and he started an organization to help them. He also started looking for the girl that lives on the dump, because he’d heard a lot about her. Katie has to lie a lot to him to make him believe she doesn’t exist.

One day, Mister Whittaker visits Katie and her parents. He says he’s looking for a girl that ran away from home. He tells them that her parents are worried and that she is dangerous and mentally ill, and that it is for his own good if he finds her, so her parents can take good care of her. Katie’s parents believe her, she doesn’t, so they have some arguments and the friendship between Katie and her father slightly becomes smaller every time.

Then, Katie gets a call from a girl named Nazeem, she tells her she’d heard great things about Katie beating Ivy Toner, and asks if she will help her to get rid of Posse, a group of three that always bullies her.

Katie is afraid, but can’t say no and she asks if Zan will help her with this.
Zan agrees and they make up a trap for Posse in an old factory. Then Katie’s father discovers them and lets them free.
Posse now doesn’t bully Nazeem anymore, and she and Katie become best friends.

Meanwhile, Zan has heard about Whittaker being in town, and she is really scared. Katie doesn’t know why, but she promises she will help.
The make up a plan to misguide Whittaker, and it nearly worked if Ivy hadn’t responded to the advertisement he’d placed.

At the end, Posse and Ivy and her gang join together as one group and all they want is to take revenge on Katie.
They know where Zan now lives (an old warehouse) and tell Mr. Whittaker about it. In return he promises them that they can have Katie.

Then suddenly Katie’s parents arrive, together with Nazeem, the head of Katie’s school, and two police officers.
They caught Posse and the other girls just at the right time, because they were definitely going to do something terrible to Katie.
When they all hurried to the warehouse, they see Zan hanging on a beam, which looked like it would break any moment. Mr. Whittaker was trying to make Zan loose her grip, by pushing her fingers off the beam, one by one.
But then, Katie’s father saves Zan, Mr. Whittaker gets arrested, and they all to home happily.

3) Zan: Zan is a girl that ran away from home and in the beginning of the book the reason why is unknown. Later in the story Zan tells that her parents died when Mr. Whittaker set their house on fire. Zan was the only whiteness, and therefore he wants to kill her.
Zan has the same look as Katie, fine dark-brown hair that reaches until the shoulders and a small fine posture. Different from Katie, Zan isn’t afraid of Ivy and her gang, and she can fight very well (but she only fights when she really needs to).
Zan likes Katie, and is a bit jealous of the perfect family life she has.
Zan is the main character in the book, together with Katie.

4)Opinion: I was satisfied with the end, because every one is happy and lived happily ever after.

5) Grading: I give this book an 8 because it is a very nice book but I have read better books in my life.