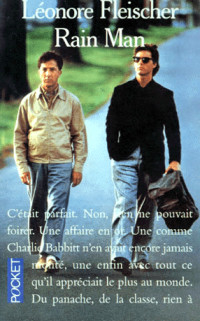 The book goes about two head characters. Namely Charlie and Raymond Babbitt.
Charlie sells cars, Lamborghini’s. He has a girlfriend called Susanna Palmieri. They both work with colleague Lenny in the business of Charlie, Babbitt Collectibles. After the death of Charlie’s father, he heard the estate of the old man. He left Charlie a car and rosebushes. In the estate stood that some kind of ‘Unnamed beneficiary’ inherits $3,000,000. He was very angry with that because it was HIS money. That ‘Unnamed beneficiary’ seems to be an autistic man, called Raymond. Later in the story Charlie finds out that Raymond is his ‘lost’ brother, because he didn’t know he had a brother.
Charlie kidnapped Raymond, then the director of Wallbrook (the house where Raymond lived) should give him his three million dollars. In the beginning Raymond was a nuisance, but after a while Charlie learned how to handle with his autistic brother. Susanna run out of Charlie because she didn’t like the way he used Raymond.

Charlie had a though time, and in times like these he remembers his imaginary friend ‘Rain Man’ he had when he was a child. After the death of his mother, his friend had gone too.
Once a day they stood in the bathroom. Charlie called Raymond by name, but Raymond said: “You can’t say my name, you’re just a baby, you call me Rain Man.” Now Charlie know that his brother was his imaginary friend!
From that moment Charlie began to like his brother. He found out why Raymond was called savant. The Rain Man remembers everything he read (even phonebooks), he could count carts and the toothpicks that were dropped. Charlie saw he could win a lot of money in casinos with Raymond. Se they went to the casinos in Las Vegas. They won a lot of money, enough for Charlie to pay his dept. Raymond met a girl in the casino, and he got a date with her at ten o’clock. When it was ten o’clock, the girl wasn’t there. Susanna (who had come back to Charlie) took the part from the girl, so Raymond had some kind of date with Susanna.
When Charlie was back to his hotelroom, Dr Bruner (director of Wallbrook) left a message. They have to give Raymond back, it was for his own good.
After a debate with Phillip Marston and Dr Walter Bruner, Charlie had to admit: the best for Raymond is to go back to Wallbrook. But Charlie Babbitt promised himself for the future to visit Raymond again.