Mr and Mrs Bennet live with their five daughters. Jane, the eldest daughter, falls in love with Charles Bingley, a rich bachelor who takes a house nearby with his two sisters and friend, Fitzwilliam Darcy. Darcy is attracted to the second daugher, Elizabeth, but a bad account of him is given to Elizabeth. He and Bingley's effect the separation of Bingley and Jane.…

Mr and Mrs Bennet live with their five daughters. Jane, the eldest daughter, falls in love with Charles Bingley, a rich bachelor who takes a house nearby with his two sisters and f…

Mr and Mrs Bennet live with their five daughters. Jane, the eldest daughter, falls in love with Charles Bingley, a rich bachelor who takes a house nearby with his two sisters and friend, Fitzwilliam Darcy. Darcy is attracted to the second daugher, Elizabeth, but a bad account of him is given to Elizabeth. He and Bingley's effect the separation of Bingley and Jane. William Collins, cousin to the sisters and as only male, heir to the Bennet estate, proposes to Elizabeth but is rejected. Darcy proposes to Elizabeth but she refuses. When Elizabeth travels north she is invited with friends to Darcy's place in Derbyshire, and thinking Darcy is absent she goes. However, he is there and she is surprised by his much-improved manners. She hears news that her sister Lydia has eloped with Wickham, an unprincipled adventurer. With Darcy's help the fugitives are found. The attachment between Bingley and Jane is renewed and leads to an engagement. In spite of the insolent intervention of Lady Catherine, Darcy and Elizabeth become engaged. 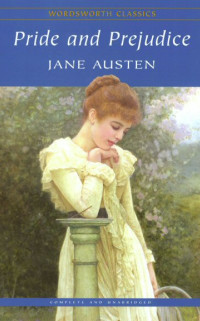 In Longbourn, Hertfordshire, live the family Bennet with their 5 daughters (Jane, Elizabeth, Mary, Kitty, Lydia).  At Netherfield is mr. Bingley going to live, with his two sisters and friend, mr. Fitzwilliam Darcy. Bingley is a very attractive, rich man. At his first ball, he and Jane like each other very much. Darcy is also rich, but he is very pride, he refuses to dance with everybody an is very rude against Lizzy.

Jane goes to Netherfield, but becomes ill and Lizzy goes to her. She don’t like Darcy cause his pride and they have a few discussions.

Mr. Collins, the cousin who will heritage Longbourn, comes. He thinks very high of himself en proposes Lizzy, but she refuses. He marries their neighbour and Lizzy’s friend Charlotte Lucas.

Jane gets a letter from Caroline Bingley. It says that they’re going to London and she suggest that Bingley will marry Darcy’s sister Georgiana.

Lizzy visits Charlotte and met Lady Catherine de Bourgh, Darcy’s aunt. She heard from an friend of Darcy that he tries to separate Jane and Bingley. Darcy proposes Lizzy, but she refuses and she’s furious. The next day she gets a letter from Darcy in which he explains why he wants to separate Jane and also what happens between him and Wickham. It seems that Wickham wanted money from Darcy and that he tries to get that through Georgiana.

Lizzy goes home and Lydia goes to Brighton with an officer and his wife. Wickham is there too. Lizzy goes with her uncle and aunt on vacation to Derbyshire and they visit Pemberly, Darcy’s estate. They meet Darcy too and in his own space he’s very nice. Lizzy gets a letter from Jane that says that Lydia has eloped with Wickham. Lizzy goes home directly and her father and uncle are going to search for Lydia and Wickham and make  them marry. Their uncle finds them and the accept to marry. Elizabeth finds out that Darcy has helped to find them and had paid Wickham’s debts.

Bingley returns to Netherfield and comes to Longbourn with Darcy. Lizzy realises that she really care for Darcy. Bingley finally proposes Jane.

Then Lady de Bourgh shows up and speaks with Lizzy. She don’t want Lizzy to marry Darcy, but she’s sent away. Darcy proposes Elizabeth though, and they marry together with Jane and Bingley.

Elizabeth: Lizzy is the second Bennet daughter. she is a pretty young woman of the age of 20. She has her own will and is a little free minded, cause she refused two times a proposal. If she was not so free-minded like Jane or Charlotte, she would have accepted. Woman in that century has , as their only goal, finding a good husband and get children. I don’t know if that is also Elizabeth’s goal, probably it is.

Lizzy is a round character, cause she changes during the story. In the beginning of the book, when she meets Darcy for the first time, she has prejudices and she hates him. But at the end, she marries him, so she is changed.

Mr. Darcy: mr. Darcy is a handsome man about mid-twenties. He behaves a little strange. He is rude, has his pride and have also his prejudices about everybody. But that is because he doesn’t feel very comfortable in Hertfordshire. He is also a round character, cause he changes like Lizzy does.

In the beginning of the book, he has prejudices, at the end not any more.


Mr. Bingley: mr. Bingley is also a handsome young man about mid-twenties. He is very kind to everybody and has a lot of friends, cause everybody likes him, but he wants that everybody is happy and is a little naïve. He is a flat character, cause he doesn’t change during the story and you don’t know a lot about him.


Jane:  Jane is the oldest Bennet daughter. she is the most beautiful girl in the whole town, but she’s very introvert. She is kind and smart, but keeps her feelings for herself, especially her love for mr. Bingley.  She is a flat character.


Lydia: Lydia is the youngest Bennet daughter. She is 16 years old and behaves like her mom does: sometimes rude and she doesn’t think before she act. She isn’t very serious, for example she is always flirting with the soldiers.  Lydia is a flat character.