The thing about Margo Roth Spiegelman is that really all I could ever do was let her talk, and then when she stopped talking encourage her to go on, due to the facts that 1. I was incontestably in love with her, and 2. she was absolutely unprecedented in every way, and 3. she never really asked me any questions...

The thing about Margo Roth Spiegelman is that really all I could ever do was let her talk, and then when she stopped talking encourage her to go on, due to the facts that 1. I was …

The thing about Margo Roth Spiegelman is that really all I could ever do was let her talk, and then when she stopped talking encourage her to go on, due to the facts that 1. I was incontestably in love with her, and 2. she was absolutely unprecedented in every way, and 3. she never really asked me any questions...

Quentin Jacobson has always loved Margo from afar. So when she climbs through his window to summon him on an all-night road trip of revenge he cannot help but follow. But the next morning, Q turns up at school and Margo doesn't. She's left clues to her disappearance, like a trail of breadcrumbs for Q to follow.

And everything leads to one unavoidable question: Who is the real Margo? 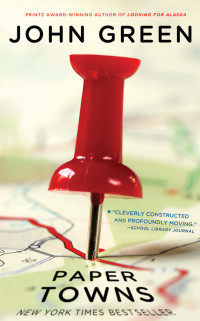 The story takes places in Orlando and they live in Jefferson Park. A very important place in Jefferson park is absolutely Margo’s house, because they found a lot of hints in her bedroom. The last part of the book takes place in Agloe, New York. That’s the ‘paper town’ where they found Margo. I think the story took place in the 21th century, because they have smartphones and computers. That was not very usual before this century. The setting in this book is very important because they don’t know where Margo is until Quentin finds the ‘paper town’ Agloe at the computer. So if they didn’t have computers, they didn’t find Margo.

The book has three parts. The first part is ‘The Strings’. Quentin and Margo are neighbours since they were two years old. They have been friends since that moment. They are in the same class in the last year of their education. Quentin is a bit a nerd and Margo is very popular. She has a boyfriend, named Jase. Margo goes to Quentin’s room in het night and she asked him to help her with her plan. She wants to take revenge on all the people who hurt her. They visited a lot of people that night. The second part is ‘The Grass’. The day after that night Margo disappeared, nobody knows where she is. Everybody is talking about the gala. Quentin found someone who wants to go with Ben, namely Lacey, a friend of Margo. Margo’s parents called the police and asked Quentin if he knows where Margo is. Quentin doesn’t say anything about last night. Margo’s parents told him that Margo often leaves hints when she disappeared. After that Quentin sees something conspicuous in Margo’s room. When her parents left home he broke into her room and searched for more hints. They found a volume of poetry in her room with a few marked poets. Quentin and his friends don’t understand it until she talked about it with their teacher. After that Quentin found more hints and he discovered where Margo is, namely in Agloe. He discovered that he must go there at the day they get their certificates. He asked his friends and Lacey to go with him and they agreed. The last part in the book is ‘The Vessel’. In that part they explain every hour what they are doing. After 21 hours they found Margo, but she isn’t happy that they found her. She is changed into a depressed girl and she never hoped that they find her. Lacey, Radar and Ben went to their hotel after that because they were angry, but Quentin stays with Margo. They talked about the poets and Margo told Quentin that she loved him before. After that they kissed and they agreed that they will meet in the future.

Way the book was written:

The style of writing is not very difficult, the English is uncomplicated and there are not many difficult words in this book. The book is divided in three parts. In the first two parts are 29 chapters and in the last part you find the description of the road trip to Agloe. The book is written in the I-form. You see Quentin’s point of view. In the book are flashbacks, but they are not very long. Quentin tells sometimes short things that happened in the past. For example: ‘In tenth grade, Ben was hospitalized for a kidney infection, but Becca Arrington, Margo’s best friend, started a rumour of that the real reason he had blood in his urine was due to chronic masturbation. Despite its medical implausibility, this story had haunted Ben ever since.’ (Page 13) I didn’t find a flash forward in this book. The end of the book is an open ending because they go their own way and you don’t know if they will ever meet in the future.

I think this book was written because it presents that you must go your own way if you don’t feel good in your situation right now. The book presents also that it‘s sometimes very difficult to understand people because they have very much emotions. I think the theme of the book is: Go your own way if you think you’ll feel better then.