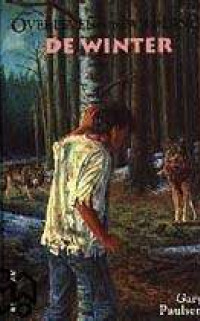 Luister nu!
Hatchet: Winter is a sequel to Hatchet, a book I already read. First a short summary of that book.

The most important person in the book is Brian. He’s thirteen years old. His parents divorced, and he lived with his mother. When he wanted to visit his father, he flew with a small plane over the Canadian wilderness. When the pilot got a heart attack, the plane crashed in the middle of the wilderness. Brian had to survive without any food or drink, the only thing he’s left with is his hatchet. Fortunately, Brian survived and after two months, a helicopter came to pick him up. The book Hatchet : Winter tells what would have happened if there wasn’t a helicopter, and what would have happened to Brian then.

Every day, it was harder to find some food. The winter came fast, and there weren’t any berries. The animals also were gone. Brian wanted to create some better weaponry, so he could catch more fish. The problem was, he didn’t know how. Suddenly, he remembered the store near his house in Canada. It was a store where weaponry was made. He thought about all the weapons he had seen there, but it was hard to remember and hard to make the weapons. He only found some stones, but those were too blunt. He became angry, and he threw a stone against the wall of the shelter. There came a arrow point! He had found the solution to make the weapons. He made some good bows, and he went hunting. Then, he saw a big moose. He shoot, and the moose was dead. Now Brian had enough meat to survive at least 3 months. From the skin of the animal, he made some warm clothes and blankets.


When he was about three months in the wilderness, he heard some shots. He searched, and he found footsteps of a man. He followed the footsteps and found a small cottage where the man lived. The man told he was here every winter to hunt, and he told there came a small plane to pick him up in a week! Brian was very happy, he stayed with the man for a week and then he could go home finally.