On the beach door Nevil Shute 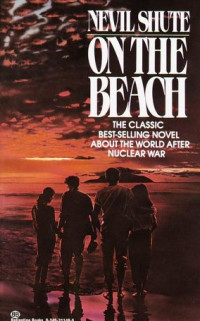 Meld je aan!
First published in: 1957
Your edition published by: Longman Group Limited
Where: Londen
In the year: 1975

Theme:
The inevitability of death (by the radioactivity). The main characters in the book are aware they are going to die, but some of them are struggling with the idea they will be killed by the nuclear cloud that arose when countries dropped nuclear bombs on each other. They plan things for the future, tough they know they are never going to see it happen.


Main Character:
The main characters are Peter Holmes and Dwight Towers. Peter Holmes is Lieutenant-Commander in the Royal Australian Navy and has a wife, Mary, and a little daughter called Jennifer. He's a hard working men and he cares a lot about his wife and daughter. He is really nice and helpful.
Dwight towers is the Captain of Scorpion, a submarine. He has the American nationality, and he actually lives in America. There he has a wife and a son. They are killed by the radioactivity a few months ago when the nuclear cloud reached America, he doesn't want to believe that, tough deep down in his heart he knows they are dead. He has a good nature and shows loyalty to his dead family. He is a good captain and cares a lot about his men on duty in the submarine. He can be very emotional about his family.

Other important characters:
Other important characters are Moira Davidson. She is a very good friend of Peter and Mary Holmes. She deals with her impending death by drinking a lot. In the story she gets a special relationship with officer Dwight Towers. She's falling in love with him a bit but then she realizes that Dwight, because of his loyalty towards his dead family, will never be able to start something with Moira.
An other important character is John Osborne. He is the scientist on board the Scorpion. John is a clever scientist who is on board to check the radioactivity of the places they are cruising. He loves car racing and has his own Ferrari. He accepts the fact that they are going to die when the nuclear cloud reaches Melbourne.

Point of view:
The point of view is changing constantly. Sometimes you can hear Peter's thoughts and sometimes Moira's thoughts. So the story is told from different points of view. This gives you a better look on the story, so you can understand it better.


Setting:
It takes place in the South of Australia, in Melbourne and Williamstown. The setting of the story is important to the story, because this is the last part of the world where radioactivity hasn't reached yet.

Time-span:
It takes place during the final weeks before radiation from the war in the Northern Hemisphere gets to the last survivors in the south.

Ending:
The ending is closed. Everybody is dying. They are vomiting and they know these are the last days of their lives. They all find a place they want to die. John Osborne takes the suicide pills in his red Ferrari, and Peter and Mary want to die in their own bed with Jennifer between them. Officer Dwight Towers takes his Scorpion to the sea and makes her sink there.
Moira takes her pills in the car when she is looking at Scorpion and thinks about Dwight.
The last sentences of the book are: At ten minutes past ten she said, 'Dwight, if you're on your way already wait for me'. Then she put the tablets into her mouth.

Opinion about the story:
I found the book intriguing. The characters in the book know they are going to die soon but they still all try to spend their last months normally, planning garden works for the next ten years, going to work, watching Grand Prix races, learning to type, and I think that's very brave of them. I couldn't live like that. I think the book gives people a clear message about the dangers of a nuclear war. It's just not right. I chose the book because when I read the first page of the book, I could not stop reading. When you read the book you really start to think about a nuclear war. Especially these days, with all the trouble in the Middle-east. People don't realize the consequences of a real war

Opinion about the grade of difficulty:
It wasn't a difficult book at all, only the story was difficult to understand sometimes. The language was simple and I think someone in the second grade could also read it.