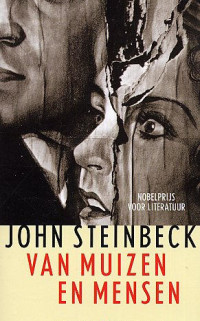 Luister nu!
Summary
Lennie is a big and dumb man, George is a small and smart guy. These two man travel together, they come from a ranch up north in Weed. They’re going to work at another ranch because they had to escape the ranch in Weed. Lennie likes mice, he keeps a dead mouse in his pocket, George doesn’t let Lennie keep this mouse because it’s not fresh. Lennie likes to pet the mice, they’re really soft, but he always pets them too hard and he kills them. Lennie isn’t a big help to George; he loses jobs and gets in to trouble. In Weed he got into trouble when Lennie wanted to pet the dress of a girl, the girl was afraid of Lennie and didn’t know it was just her dress Lennie was after. Their dream is to have a little farm of their own, with rabbits Lennie would tend.
When they arrive at the ranch they meet their boss and also the son of the boss; Curley, Curley doesn’t seem to be fond of Lennie, he hates big guys because he’s a little guy himself. Curley just got married a few weeks ago. When they meet his wife, Lennie thinks she’s very pretty but George warns him to stay away from her, otherwise they’ll get into trouble again. They meet Slim, a really nice jerk line skinner that has some puppies. Lennie really wants a puppy to pet instead of mice and he gets a puppy. George tells Slim the story of him and Lennie; he used to tease Lennie a lot but Lennie, big as he was, never harmed him. George has stopped doing that now. George also tells Slim the reason they fled the ranch in Weed. One of the workers; Carlson insists on shooting an old dog that belongs to Candy; a really old man with only one hand, because this dogs smells really bad. Candy doesn’t want this but eventually gives in. George and Lennie tell Candy, the old man, about their dream of having a little farm for themselves. Candy wants to join them; he can put in 300 dollars, they need 600 dollars. The three of them make a plan; next month their dream will come true.

Than there’s a fight between Curley and Lennie; Curley keeps on hitting Lennie and Lennie doesn’t know what to do. Then George tells him to hit back and he listens to George; he crushes Curley’s hand, that’s how strong he is. Curley promises to tell everybody he got his hand cut in a machine. Crooks is the negro stable buck of the ranch, he lives in a little shed that leaned of the wall of the barn; the harness room. He is a cripple. Lennie goes to Crooks; all the other men are out and Lennie saw light burning in this room. Lennie tells Crooks about their dream; having a little farm for themselves. Crooks tells Lennie how lonely he is; being a negro, he cries. Candy also comes in; Crooks offers to work for them on their little farm. Curleys wife comes in, she wants to talk but the three of them send her away. She threatens them, then the other guys come back. It’s Sunday afternoon, Lennie is in the barn, looking at his dead pup. All the other men are playing horse shoe. Curleys wife comes in, she wants to talk with Lennie because she never gets to talk to anyone. She allows Lennie to pet her hair; it’s really soft. Then Lennie his petting starts to hurt; she screams. Lennie doesn’t know what to do, he puts his hand in front of her mouth. He holds on to her until the screaming stops; Lennie broke her neck, she’s dead. Lennie runs and goes to hide in the bushes like George told him to do if he’d get into trouble again. Candy looks in the barn for Lennie; he finds Curley’s wife; dead. He gets George and shows him. George goes to the bunk house, then Candy tells the other guys the news. All the other men ride out to find Lennie and then shoot them on Curley’s orders. George searches for Lennie and finds him, he tells Lennie it’s all going to be all right, that they’re going to have a little farm and Lennie can still tend the rabbits. Then George shoots Lennie; he’s dead.