Call me by your name door Andre Aciman

During a restless summer on the Italian Riiera, a powerful romance blooms between seventeen-year-od Elio and his father's house guest, Oiver. Unrelenting currents of obsession ad fear, fascination and desire threaen to everwhelm the lovers who at first feign indifference to the charge between them. What grows from the depths of their souls is a romance of scarcely six…

During a restless summer on the Italian Riiera, a powerful romance blooms between seventeen-year-od Elio and his father's house guest, Oiver. Unrelenting currents of obsession ad f…

During a restless summer on the Italian Riiera, a powerful romance blooms between seventeen-year-od Elio and his father's house guest, Oiver. Unrelenting currents of obsession ad fear, fascination and desire threaen to everwhelm the lovers who at first feign indifference to the charge between them. What grows from the depths of their souls is a romance of scarcely six weeks' duration, and an experience that marks them for a lifetime. For what the two discover on the Riviera and during a sultry evening in Rome is the one thing they both already fear they may never truly find again: total intimacy. 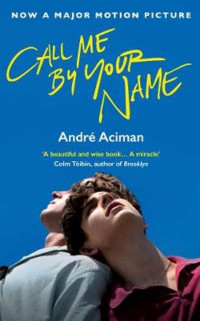 Title of book:Call Me by Your Name

Summarize in one sentence what the book is about.

The book is about two young man, who spend their summer together and the growth of their romantic relationship.

Every year Elio’s parents invite a doctoral student as a summer guest in their summer residence. This year the casual and confident Oliver stays for the entire summer. Olivers presence is enjoyed by the entire family and even by the rest of the town. The longer Oliver stays, the more invites he gets to have dinner or lunch by other people to discuss his manuscript. Elio is impressed by Oliver and notices different, little things: the way his swim shorts represent his mood of the day or how he says the word ‘later’ and manages to give it so much more meaning. The two boys spend their days in morning jogs and swims and when they’re finished, they’ll lay aside of the bool reading books and working on his manuscript. While they cycle together to the bookshop, Oliver’s translator or when they talk during the warm summer hours, their romantic relationship grows.

When Elio shows Oliver the berm where Claude Monet supposedly painted, he confesses his attraction towards Oliver and they kiss. When Elio touches his penis, Oliver resents. The coming days they don’t talk anymore. In these days Elio begins seeing Marzia, a girl his own age. But because Elio’s attraction towards Oliver doesn’t lessen, he slips a note under his door and proposes to meet at midnight. As they do, they have sex. While Elio feels guilty and decides he can’t continue his relationship with Oliver, they have oral sex the next morning. And therefor they both realise their attraction to one another persists and they do continue their relationship.

Before Oliver goes back to The States, he goes to visit Rome and is accompanied by Elio. Oliver will finish his book there and meet with his publisher. They spent the weekend as a sexual getaway and they party with the people they meet in Rome. When Elio goes back home, he is saddened to find that every trace of Olivers stay has already been erased.

In the twenty years to come Oliver goes to marry in America and he builds a family, Elio and he don’t speak for many years. Fifteen years after the summer Elio visits Oliver in America, but when he is asked to come to dinner he refuses, and states that it would be too emotional for him. During the last encounter mentioned in the book Oliver visits the villa in Italy, where he and Elio go to all the spots they had memories. Elio concludes with his statement that, if Oliver really loved him, he would ask him to call him by his name one more time.

Describe the theme in one word.

Of course, it would be easy to choose homosexuality as a theme of the book. However, in my opinion the book isn’t about the development of their bisexuality, but about their love and obsession for each other. The book being about two male characters falling in love seems more of a side issue than the main theme.

Describe the main character in detail. Use about 50 words.
(Age, personality, character development throughout the story et cetera.)

The narrator, Elio, is a 17-year-old boy who spends his summers in Italy. He is an introvert that gets the most joy out of reading books, playing tennis or jogging and making music. His parents raised him to be literate and because of all their academic guest he became able to converse in conversation on all sorts of topics. He comes from a family from “Jews of discretion”.

Oliver is a doctoral student, a 24-year-old, who is a summer guest with the family of Elio. He is a Jewish scholar from America. He is very easy going and will befriend everyone. Together with Elio he enjoys his morning jogs. Oliver is confident and manages to impress other with his appearance.

Marzio is a girl around the same age as Elio, she lives in the neighbourhood. Elio and she go out on dates, especially when Elio needs to take his mind of Oliver. Marzio enjoys Elio’s company, but knows that, to him, she is nothing more than a casualty. Therefor she’ll resent him, but they remain friends.

Describe the place(s) where the story is set in detail.

The book mainly takes part in the villa of the family. Elio and Oliver sleep in next-door bathrooms that share a balcony. Here they sometimes meet, looking out over the garden.

They will also be at the pool, were Elio will read his books and Oliver works at his transcripts' will lay there in silence with a couple of pillows.

When they go to the town together, they’ll most likely visit the piazetta by the sea. Oliver would look over the magnificent looks over the sea, while Elio shows his interest at the war memorial. Once a bus of visitors of the war memorial loads out.

When does the story take place? (How do you know? What is the length of time of the story? Is the story told chronologically? Does the author use flashbacks? Explain in detail!)

The narrator tells about a story that happened about twenty years ago. No year is being named, but since it’s written in 2007, I'm guessing it takes place somewhere around 1990. In the end of the book the author also has a short chapter, fifteen and twenty years later.

Who is the person who tells the story (the narrator)? (Does the author tell the story, or is the story told from the point of view of one of the characters? Explain.)

The story is told from a first-person perspective, by the main character, Elio.

Give an explanation of the title.

‘Call me by your name’ is a reference to the passionate love of the main characters. It means, that when you have such an obsession for someone you can become one person with one name.

Is the book just meant as a story or is the author trying to bring across a message? If so: why? If not: why not?

I think the writer means to give a wider view to the abstraction of love.

Leesbeleving en evaluatie
Write a personal evaluation of your book in which you answer the following questions (explain all your answers in detail):

What is your opinion about the book?

I think the book is wholesome. It’s impressive how the author managed to fill almost 200 pages with different descriptions about love. But, a major downside to the book, is something I didn’t realise at first, the age-difference between Elio and Oliver is seven years, they’re 17 and 24. I do think that there is no way they have a healthy relationship with each other and I disapprove.

Would you recommend the book to your classmates?

I would, it is very different from books I’ve read before. This is because, most of the time there is a ‘bigger’ plot. In this book the entire story is about their love for each other. The author filled multiple pages with Elio’s thoughts of desire. For me this was new, and I thoroughly enjoyed it and I think some of my friends will as well.

Which part did you like best or was most important in the development of the story? Quote (citeer) a passage or sentence from the book which you found most impressive or touching.

“Or are "being" and "having" thoroughly inaccurate verbs in the teisted skein of desire, where having someone's body to touch and being that someone we're longing to touch are one and the same, just opposite banks on a river that passes from us on to them, back to us and over to them again in this perpetual circuit where the chambers of the heart, like the trapdoors of desire, and the wormholes of time, and the false-bottomed drawer we call identity share a beguiling logic according to which the shortest distance between real life and the life unlived, between which we are and what we want, is a twisted staircase designed with the impish cruelty of M. C. Escher.”

This quote, to me, is a good example of how the author filled his book with interesting passages, while nothing is happening in the development in the story.

Which part disappointed you most?

The part about Elio being 17 and Oliver being 24.