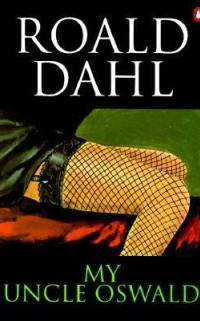 Titelverklaring
The title is actually really clear because the story is about the narrator’s uncle Oswald.

Samenvatting
The story is about a man, called Oswald Cornelius, who loves money, women and sex. His story is all about the way he became rich. He discovered the marvelous possibilities of the Sudanese Blister Beetle powder. So, after making a lot of pills, he sold them to people who would like to please their partner a lot. In sexual aspect, I mean.
After a while he met Arthur Woresley, a scientist, and Yasmin, a beautiful student. Arthur was the one who discovered how to keep sperm alive for a long time. That’s how Oswald got another idea. Together they would collect the sperm of a lot of famous men in the world. (For example, they went to Freud, Picasso, Renoir, and so on…) They kept all the sperm at one place, called Semen’s Home. And with all the sperm they received, they wanted to sell it to women to fertilize them. But when they almost finished their job, Yasmin and A.R. Woresley deceived Oswald and they ran away with all the sperm. That’s why he started a Blister Beetle Factory in Sudan and nevertheless, he became rich.


Coververklaring
You see two women legs concealed in a dress. I think they are Yasmin’s, because she’s the girl who has to attract all the men.

Ander einde
…After picking up Yasmin at the London station, we went to America. Or actually it was the meaning. But at once I realized that I didn’t want to do this anymore. My whole life was getting the same. I had everything; money, beautiful women and I’ve seen such a lot of the world. So I told Yasmin about my problem and that I actually didn’t want to go further. She didn’t react surprised and that’s why we both decided to take an overdose of the Sudanese Blister Beetle pills. You will remember, because I told you before, that more than a pinhead of the powder means your death. So, after shaking and raving for a while, we both died.
A.R. Woresley published his ‘sperm hypothesis’ and became famous…

Mening
Actually I hoped before, that this story would be like one of the others I read of Roald Dahl. And it was, happily.
You have to know that I’ve been reading his books since I was a little child. And just like the other stories, I loved the way he wrote this one too. It seems he can bring me to another world.
And finally it’s not the topic of the book, sex and richness, which interests me, but the way he verbalizes it. I’m always surprised about the way he impersonates his world of imagination.
And, after all, it was also really funny. Sometimes I laughed loudly about some parts of the book.

So, you can say I really enjoyed this book. Just like the others. Roald Dahl will never bore me. He just proved it again to me.