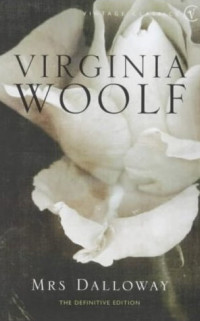 The book tells the story of what happened on a summer day in the 1920’s. Clarissa Dalloway will be giving a party that night. She thinks during the book about her past, most specifically about Peter Walsh. This man was her lover but she married her current husband Richard Dalloway. At the same time, a man who has nothing to do with Clarissa, called Septimus Warren Smith, walks down the street with his wife Lucrezia. He is suffering from shell shock.

Peter Walsh drops in by Clarissa’s house and they have a conversation, but without warm feelings. Peter thinks about why Clarissa choose Richard and why Peter went to India. Peter leaves.

Meanwhile, Septimus and Lucrezia are walking in the park, Septimus is explaining why suicide is good. Lucrezia takes him to a doctor called Sir William Bradshaw, who says he has to be alone for a while.

Richard Dalloway buys flowers for his wife and has the intention to say he loves her, but he can’t. Meanwhile Lucrezia and Septimus are in there apartment, waiting for the man who will bring Septimus to retreat. He doesn’t want to go and jumps out of a window, he commits suicide.

Peter hears the ambulance carrying Septimus away. He decided to go to Clarissa’s party. Clarissa fears that her party won’t be a success, but it is. However, she feels dissatisfied. She hears from Bradshaw, also one of her guest, that he is late because one of his patients has committed suicide. Clarissa concludes that Septimus realized that man like Bradshaw make life intolerable. The party ends and Richard approaches to Clarissa. Peter founds out that he still loves Clarissa.

Setting: the book is set after World War I, in begin 1920’s. It plays in London for only one day, but it contains a lot of flashbacks.


Title explanation: Mrs. Dalloway refers to the main character of the book. Mrs. refers to that Clarissa has chosen Richard and that choosing him has a big influence on her current life.


Theme: one of the themes in Mrs. Dalloway is society and class, and the struggles with it. Clarissa belongs to de upper class of England, the most important and powerful one. She believes that the best thing she can do for society is giving a good party. Most of Clarissa’s friends are in the same upper class. Other characters are in a lower class and they actually don’t like the upper class (like Miss Killman).

Another theme is suffering (physically , emotionally or mentally) . Septimus is suffering from delayed shell shock caused by World War I in which he saw his friend die. Also Clarissa is suffering, and Peter because of the past.

The last important theme is memories and the past. Although the book covers only 1 day, you know a lot about what happened in the past because the characters think about their memories. Some of them are good ones, Clarissa has more good ones than bad. Peter can’t stop thinking about Clarissa and why she rejected him. Septimus is obviously suffering from his past, his memories drive him crazy.

When I started reading, I had a real struggle to read on and to understand what happened. The book is very confusing, with the past and the present weaved together and because there are a lot of point of views changings. Also, it isn’t a very exciting book, because everything happens in one day and the characters think of their past. That made it hard to read for me. In the end, it went better and I understood more. I am not sure if I would suggest this book to my classmates. I think the story is a good one, but you have to think a lot about it and I had to search on internet for information, because I didn’t understand the book completely. Because this book isn’t so easy, I wouldn’t recommend it if the reader doesn’t like reading or doesn’t have so much time to read. But if the reader has time, likes a book without action and is quite smart, Mrs. Dalloway is a nice book to read.