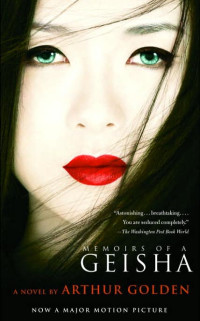 Luister nu!
Bibliography
The book I read is called ‘memoirs of a geisha’ and it is written by Arthur Golden. It was first published in April 1998 by Alfred A. Knopf, Incorporated located in New York, USA. The book contains 35 chapters and a total of 503 pages.

Story/contents
The story begins in a poor fishing village named Yoroido where nine-year-old Chiyo lives with her elder sister, Satsu, and their parents. Chiyo’s mother is really sick and when she dies, her father, who is a poor fisherman, sells his daughters to a rich man in the hope that they will have better lives.

This man sells grey-eyed Chiyo to the Nitta-okiya in Gion, Kyoto. But Satsu is not as lucky and she ends up in a brothel in the red light district Miyagawa-cho where she becomes a cheap prostitute.


In the Nitta-okiya Chiyo begins Chiyo’s geisha training. She is treated as a slave and has to clean the rooms, the floors and make sure that Hatsumomo, the most successful geisha of the Nitta-okiya, has everything she needs. Chiyo can only get out of the house to go to school or when she has to run an errand.

Hatsumomo hates Chiyo from the beginning because she is afraid that Chiyo will one day become a more successful geisha than she so she does everything to hurt her physically and mentally. The only person in the okiya Chiyo gets along with is Pumpkin, a round-faced girl she goes to school with. At school they learn to play the shamisen, to dance, to sing, to converse and to practice the art of the tea ceremony, all in very disciplined and structured conditions.

When everything seems to go fine, Chiyo decides to run away with her sister. She wants to get out of the house by climbing on the roof of another okiya, but when she’s on top of it, she slips and falls. The three most important women of the okiya named Mother, Granny and Auntie are contacted and they come to the decision not to spend any more money on Chiyo because she is now seen as a bad investment. From this day forward Chiyo has to work as a maid.

Then one day Chiyo’s shopping for the okiya, but cannot take it anymore and throws herself onto the stone wall at the edge of the Shirakawa River and cries. There, a chairman tries to comfort her and gives her his handkerchief. She falls in love with him instantly.

A few months later, when Chiyo is still working as a maid, Mameha knocks on the door. Mameha is one of the best geishas in Gion, this is also the reason why Hatsumomo hates her. Mameha wants to become Chiyo’s big sister. A big sister takes the younger geisha to tea ceremonies and parties in teahouses, she also introduces the younger geisha to all her customers and gives her a good reputation. It’s unusual to have a big sister from another okiya, but Mameha makes a pact with Auntie. If Chiyo becomes a successful geisha, Auntie has to pay Mameha and if Chiyo fails, Auntie receives money from Mameha. Hatsumomo hears about this pact and becomes Pumpkin’s big sister, just to compete with Mameha. Chiyo becomes a very successful geisha, and changes her name to Sayuri.

After a few years of success in Gion, the Japanese war starts and Sayuri has to move far away from Gion. She stays in the house of Kimono maker Arashino, a friend of Nobu, one of her customers and a very good friend. There, Sayuri has to dye the kimonos, the dye has a lot of chemicals that leave scars on her hands.


After the war Sayuri returns to Gion and starts her geisha life again. She sees the Chairman and realizes that she is still in love with him. But Nobu wants to become Sayuri’s danna , which makes it impossible for Sayuri to be with the man she truly loves. During a holiday on a Japanese island she makes a plan to get rid of Nobu, it works and he never wants to see her again.

A while after that the Chairman declares his love to Sayuri. And explains that he was the one who told Mameha to become her big sister. Sayuri becomes the Chairman’s mistress, moves to New York where she opens her own teahouse and lives happily together with the Chairman, until he dies.

Time & place
Mizuage niet door nobu maar door dokter krab
I don’t know exactly when this all took place. I know that there was a period of a Japanese war and a great economical crisis. The only date mentioned in the book around the time of the war is the summer of 1939. I looked up this date on the internet and there actually was a Japanese war going on then. In that same chapter, we hear that Sayuri is eighteen years old now. We can now easily conclude that the story starts in 1930, when Sayuri is 9 years old. I can only guess when the story ends. I think that it is approximately around 1957 or 1958 because the last date spoken of in the book is 1956. In 1956 the chairman arranged a wedding for one of his daughters and that man would become his successor. But he cancelled everything at the end. The book doesn’t end long after this fact was revealed, so I presume that the story ended in ±1957-1958.
As to where the whole story took place. Well, that really isn’t hard. The first part of the book takes place in Sayuri’s old apartment in New York. When the real story of her life begins, it takes place in Yoroido, quickly transferring to Gion, Kyoto. It stays this way throughout the whole period, except for a brief period during the Japanese war mentioned earlier.

Structure
I think that I have made the structure of the book or story quite clear in my summary. I will leave it at that.

Point of view
The story is told throughout the ‘I-perspective’. You don’t get to know directly what other characters are thinking because you are in Sayuri’s (Chiyo’s) head all the time. You do get to know what Sayuri knows or speculates that other characters think or feel, but never directly. This is very understandable because it is in fact Sayuri herself that tells the story. I like this way of writing because you can take a very deep look into the main-character and you really get to know her. You even feel sympathy for her when she is sad and we feel happy for her when she is too. It is a great way of reading, to completely (try to) sympathize with the main-character.

Title/subtitle
This is probably the easiest title that I have ever explained. The book is about the life of geisha’s in Tokyo. The title ‘memoirs of a geisha’ means exactly that what you read. No underlying feelings or thoughts, no references to any other mystery. This book is a geisha’s memoir. Sayuri’s memoir. It’s as simple as that.