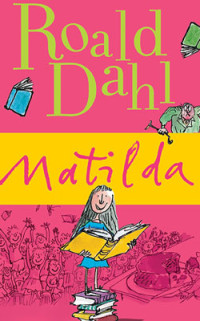 Luister nu!
Summary
Matilda is a 5 years old girl. She has a father, a mother and a older brother. Her father is a dealer in second-hand cars. Before he sells a car, he turns the speedometer backwards, and fiddles the numbers back so it looks like a newer one. Also he puts sawdust in the tank. So he sells the car for much more money than it is actually worth. That is not really honest. Matilda's mother only looks at the telly, and in the evening she is always playing bingo. Matilda is a very clever girl, even though her father thinks she is stupid.
When Matilda was only 4 years old, she learned herself to read. She went to the library to borrow books. In a very short time she begins to read books for adults. Mrs Phelps, the librarian helps her to choose the books. One day, Matilda wants to tease her father. She puts superglue all round the inside rim of his hat. When her father put the hat on, he didn’t notice anything. But when he arrived at the garage, he couldn’t get his hat off. He had to sleep with his hat on his head. The mother of Matilda has to cut the hat from his head.

One day Matilda borrows her friend's parrot. She puts the parrot in the chimney. The parrot says ‘hullo, hullo, hullo’ all the time. So her father and mother think that there is a ghost in the house. They were scared about the noises. Another time, Matilda puts ‘platinum blonde hair-dye extra strong’ from her mother in her fathers ‘oil of violets hair tonic’. Because of that his hair became blond.
Matilda’s first school day came along. She likes school. Her teacher was miss Honey. She is very lovely and nice. Miss Honey is perplexed about Matilda. She is very good in writing and calculating. The school head is called Miss Trunchbull. She is very strict. Sometimes, she tortures children. She teaches in Matilda’s class every Thursday. One day, Matilda’s friend dropped a salamander in the tankard. Miss Trunchbull thought that Matilda had done that.
Suddenly Matilda had a strange feeling in her eyes. She looked at Miss Trunchbull's glass of water for a long time. Then the glass of water fell over. Matilda had a gift to move things with her eyes.
One day, Miss Honey invited Matilda to drink a cup of tea with her in her house. Miss Honey lives in a very little house and was very poor. She told her that Miss Trunchbull was her aunt. When Miss Honey’s father died, Miss Trunchbull wheedled the great house of her brother (Miss Honey’s father). And Miss Honey had to live in this little house. Matilda wanted to revenge. Every day she practised her special talent. Thursday in the afternoon, Miss Trunchbull taught Matilda's class. Matilda focused on the drawing chalk. Than, the drawing chalk began to write by itself. The drawing chalk wrote:
Miss Trunchbull,
I am the father of miss Honey
Now you have to leave the house
If you not leave the house, I will revenge you
Give back the house to miss Honey
Miss Trunchbull was scared. She ran out of the class, and returned never again.
The father of Matilda was arrested by the police, because he dealt in stolen cars. Matilda’s mother and her brother escaped to a foreign land. Miss Honey adopted Matilda. They lived now in the great house, and are very happy together.