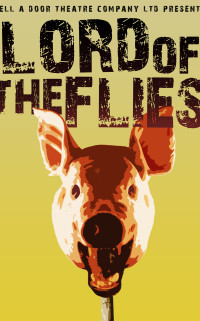 Meld je aan!
Lord of the Flies
William Golding
first published in 1954
by Faber and Faber limited
London
Summary
Two boys meet on a beach. Ralph is fair and Piggy is fat and has got specs. They are part of a group of boys who were transported out of England after an atomic bomb has fallen on it. Their plane was attacked and it dropped the boys on an island before it crashed. Only boys have landed on the island. There are no grown-ups, there is no one who can tell them where they are.
Ralph and Piggy find a conch, a valuable shell which you can use as a horn. Ralph blows on it and all the boys come running to him, including a bunch of little boys and Jack and his choir. They decide that they need rules and a leader. The two people who seem to be capable of leadership are Ralph and Jack. Ralph seems capable because he has found the conch and organised their first meeting. Ralph is the leader of the uniformed choir. Those uniforms look powerful, which makes Jack powerful, because he can give orders to the uniformed boys. They vote and Ralph becomes the leader. To keep Jack happy, Ralph makes him the leader of the hunters.

Ralph, Jack and Simon, a choirboy, decide they will go and explore their landing place. They discover that they are on an uninhabited island. If they want to be rescued they need to make a fire with a lot of smoke. They go to the highest a place on the island and make a fire with Piggy’s specs. Something goes wrong, and they accidentally burn down part of the island. The hunters are responsible for the fire.
Meanwhile Ralph and the littluns make shelters. The littluns are scared because someone saw a ‘beasty’. They are crying a lot even though the older, more sensible ones try to calm them by saying there isn’t a beast on the island.
The hunters don’t want to watch the fire, they want to hunt. They leave the fire alone to go hunting. That wasn’t smart. The littleuns see a ship for the first time. But the fire is dead, so the ship won’t notice them. Ralph is angry at Jack. How could he do that? Doesn’t he want to be rescued? They become more and more distant from each other.
Jack becomes interested in the beast of the littluns. He wants to spend more time hunting, hunting pigs for meat and hunting the beast. Ralph thinks that rescue is still the most important thing. They go hunting together for the beast, to keep the littluns satisfied. Searching the whole island seems to be the best way of finding the beast. When they arrive at the highest place of the island, where the fire used to be, they see something, a shadow. They get scared and run away.
The difference between the opinions of Jack and Ralph splits up the group. Jack starts his own camp. Jack gets good at hunting. He catches many pigs and gives feasts for everyone, there is enough meat. This makes his camp very popular. Jack’s tribe starts to paint their faces, it makes them look stronger. They become more and more like animals, like wild beasts without rules. The only things they care for are hunting, feasting and the beast. To keep the beast satisfied they give it the head of the pig, as a sacrifice. The head attracts a lot of flies. Simon sees this and calls it the lord of the flies. At the highest place on the island Simon also sees a dead parachutist, his parachute blowing in the wind. The others must have thought that this was the beast! He runs to Jack’s camp to tell him. When he arrives there, Jack thinks he’s the beast. They kill Simon.
The group of Ralph becomes really small. The only members are Sam and Eric, inseparable twins, Piggy, a few littluns and Ralph himself. The only valuable things are the specs of Piggy and the conch.