When Michael Dillon is ordered by the IRA to park his car in the carpark of a Belfast hotel, he is faced with a moral choice which leaves him absolutely nowhere to turn. He knows that is planting a bomb that would kill and maim dozens of people. But he also knows that if he doesn't, his wife will be killed.

When Michael Dillon is ordered by the IRA to park his car in the carpark of a Belfast hotel, he is faced with a moral choice which leaves him absolutely nowhere to turn. He knows t…

When Michael Dillon is ordered by the IRA to park his car in the carpark of a Belfast hotel, he is faced with a moral choice which leaves him absolutely nowhere to turn. He knows that is planting a bomb that would kill and maim dozens of people. But he also knows that if he doesn't, his wife will be killed. 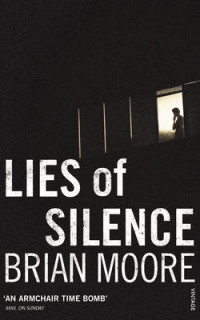 Lies of Silence
Brian Moore
Blackbirds, 192 pages
Theme
The theme of this book is making choices. Dillon, the main character, has to make some difficult choices. He gets involved in the IRA. He is forced to kill his boss, Pottinger and a lot of other people who stay in the hotel. If he doesn’t kill his boss, the IRA threatens to kill his wife. Then he has to take a choice; or following their orders or risking the life of his wife. And that’s not the only difficult choice. He has to make another decision; leaving his wife to live with another woman or staying with her. And there is also the treatment of the IRA, but he decides to start a new life. That wasn’t easy and he had to think a lot of these difficult problems.
Time
The story is told in a chronological order. The story starts with Michael who gets involved in the works of the IRA. He has to kill his boss, but he didn’t do that and after that he’s afraid. He has to live with fear, because the IRA is dangerous.

And then, his live goes on. That’s not easy, because there is always a threat. He has to make choices and his live goes on. His life has changed after the involvement with the IRA. His life has totally changed and I noticed this very clearly in this book.
This is a story that could have happened a couple of years ago. It’s about the IRA, which were active in Ireland. They haven't been active for the last few years. But the years before, they were active and very busy with bombing and things like that.
Point of view
You are constantly in Dillon’s mind. You read what he is thinking and walk with him through the whole story. Dillon has a couple of problems which have an influence on his way of thinking.
Characterization
The story is told from the point of view of Michael Dillon. That’s why you know him quite well. He is in the thirties and married to Moira. He is a busy man and likes his job. He is a bit uncertain about his future and has to make a lot of choices. That affects his life. Another character is Moira. That’s his wife. She loves Dillon and isn’t as afraid as Dillon is. She dares to talk to the men of the IRA and tries to escape. She has got swank and is straight to the point. She says what she is thinking and that’s what makes her a strong woman.
Another character is Andrea. That’s his girlfriend. She is uncertain about her future with Michael, but she is able to make her own decisions.

The only character who develops is Michael. He is afraid of the IRA and that has an influence on how he handles things and leads his life.
Space
The story plays in and around Belfast, a big city in Northern Ireland. That has something to do with this story, because this is a place where the IRA is active.
In the beginning the IRA is inside the house of the Dillon’s. The lights are out and it’s dark. That is good, because this is what it makes more thrilling.
Structure
This book has got 10 chapters and has got 192 pages. It was very clear.
The structure is good. You get totally involved in the story when you have read a couple of pages.
Style
‘No’, he said. ‘Listen, my transfer is come through. I’m going to London tomorrow.’
‘Are you, now?’ She said sarcastically. ‘Well, if you do, I suppose that’s the end of us.’
‘Look’, he said. ‘I want to talk to you about that’.
‘About what, she said and suddenly he saw fear in her face’.
‘About us.’
‘What was her name again? The one you were holding hands with this morning?’
‘Her name is Andrea Baxter’
Genre
This book is a thriller but also a psychological novel. Dillon is afraid of the IRA, but has to make a couple of difficult choices. And that isn’t easy for him.
Opinion
I liked reading this book. It wasn’t difficult to read it and the story was nice. I thought that it would be more exciting, but it wasn’t. Only in the beginning do you see the IRA and that’s all. After that, the choices Dillon has to make are more important.
I didn’t like the ending, it was too sudden. And that’s what the book makes less attractive. The whole story is nice to read and then is it suddenly finished.