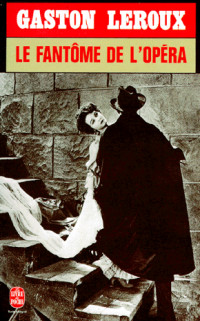 Title: “Phantom of the Opera”

Christine Daaé: Christine is a young girl who works at the Opera. She is a very good operasinger, but no one sees her talent so she may only dance in the show. Later on she becomes the star of the opera. She is very quiet and modest, but also very sweet and she has a great talent. Her father died when she was young so she lives in the opera.

The Phantom of the Opera (Erik): The Phantom lives underneath the opera, he came there when he was a young boy. He has a maimed face and that’s why he wears a mask all the time. He is in love with Christine and gives her singing lessons, but she doesn’t know he is the Phantom of the opera. The phantom is dangerous and everyone in the Opera is afraid of him but he’s a great operasinger.

Raoul: Raoul is Christine’s youth love. They met when they were little and they have played a lot together. They meet each other again in the Opera, when they are both older. They fall in love again, and they become very happy together. Raoul wants to do everything to keep Christine safe from the Phantom. He’s a real gentleman and very sweet.


2. Where does the story play?

The story does play in Paris, in the Opera Garnier.


3. Which time does the story play?

Omniscient, you can look into every persons head. The story is told in the third person.

The theme of the story is impossible love because that’s what the whole book is about. The phantom of the opera is desperate in love with Christine, but she is not in love with him so they can never be together. But still though, the phantom didn’t stop trying to seduce Christine.

Another theme of the book is friendship , Christine begins a friendship with the Phantom without even knowing what he looks like. This means that her friendship with Erik is real, she didn’t and couldn’t judge him for his maimed face because she never saw it.

Grief is something both the Phantom and Christine share. Christina has lost her father at young age and still thinks about him a lot. The Phantom lives his life alone, he always has. He has no one, not even family, and feels very alone. Everybody is afraid of him because of his maimed face, when you read the book you feel how sad and frustrated he is about the fact he has no one and no one will ever want him.

Hiding or concealment is a thing that comes by a couple of times in the book, the Phantom wears a mask to hide his face for Christine and all the other people. Erik hides himself in the secret chambers of the opera, so it’s all hidden away and nobody knows about it there are only rumours about it. When Christine was taken into the Phantoms secret room, it could be confirmed the secret places in the Opera is real and the Phantom of the Opera is real.

The title is simple; it’s the name of Erik, who is the phantom of the Opera. The whole book is about him trying to get Christine.

I liked the scene when Christine gives the Phantom, Erik, a kiss and out of love het lets Christine and Raoul go. I think it was the best part of the book because it shows that Christine, somewhere deep in her heart, loves Erik. Only not enough tob e with him, she loves Raoul much more. Because of the kiss Erik realizes that and he gives up his hope, he lets Christin go so she can be happy. That’s all he wants left.


8. I liked it when Christine became the prima donna of the Opera because she had the best voice of the whole opera, she deserved it and that’s why i liked it when she finally became it. I didn’t like the part where the Phantom isn’t nice to Christine. He yells at her and i think that he is very outrageous against her, i don’t like that because he is in love with her and you don’t do something like that when you’re in love with someone.


9. How does the story end and what do you think about it?

Raoul and Christin can be together and the Phantom dies after three weeks “out of love”. I don’t like it that the Phantom dies, he could also have had a nice life. But only because of his mutilation people don’t like him, but they don’t even know him yet. So he just killed himself, because he won’t get accepted by other people except for Christine. That was because she never saw him when he gave her singing lessons. The phantom can’t be with Christine, because she’s with Raoul, so he has no one to life for anymore.

I would like to be Christine because she is very beautiful and she had a great voice. She is also very brave and she accepts the phantom for who he is. She is not afraid of his mutilation. I think that’s very brave of her because all the other people just thought he was a monster without even knowing him.