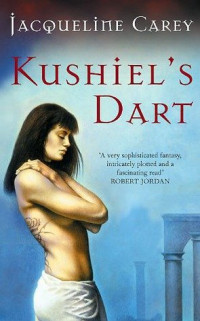 Luister nu!
1. What is the name of the author?
Jacqueline Carey

2. What is the title of the book?
Kushiel’s Dart

4. Why did you choose this particular novel?
I like fantasy novels, and I had bought this one after reading a part of it at my sister’s

5. By whom is the story told?
Phèdre nó Delaunay

6. When does the story take place and does this influence the story?
In a sort of medieval Europe

7. How long does the story take?
A couple of years


8. Where does the story take place and does this influence the story?
She travels through almost all the country’s in this fantasy Europe

9. What is the theme of the story?
Your fate can turn out different than you might think

10. To which literary genre does the novel belong?
Erotic-fantasy novel

11. Give information about the author.
Jacqueline Carey is the bestselling author of the critically acclaimed Kushiel's Legacy trilogy of historical fantasy novels and The Sundering epic fantasy duology.
An avid reader, Jacqueline began writing fiction as a hobby in high school. After receiving B.A. degrees in psychology and English literature from Lake Forest College, she took part in a work exchange program and spent six months working in a bookstore in London. While living abroad, the desire to write professionally emerged as a driving passion. Upon returning she embarked in earnest on a writing career, which came to fruition a decade later. During this time she worked at the art center of an area college, gaining a strong background in the visual arts. Jacqueline enjoys doing research on a wide variety of arcane topics, and an affinity for travel has take her from Finland to Egypt to date.
She currently lives in west Michigan, where she is a member of the oldest Mardi Gras krewe in the state. Although often asked by inquiring fans, she does not, in fact, have any tattoos.


12. What is your opinion of the novel? Give arguments.
I enjoyed reading the book, she’s getting into the weirdest problems, and the way the people get along with each other is pretty intersting

13. Make a short summary of the novel.
The history of the land of Elua is the same as ours till the crucifixion of the Christ. Maria Magdalene wept at the cross’s feet, and when her tears mingled with the blood of the Christ, it produced a kind of Angel called Elua. The one god didn’t acknowledge him, though thirteen angels decided to follow him, reckoning him as a child of God. There was also a woman named Naamah who followed him, she decided to protect and care for Elua by selling herself for his needs. Eventually Elua found the land on Terre d’Ange, where the people welcomed him, and he and his angels settled down there.

In the time this story’s told, the people of Terre d’Ange are all over the world known for their beauty and grace, since they are all the descendants of the Angels. Because of Naamahs sacrifices, she became a sort of Blessed Whore, wich is honoured in the Court of Night-Blooming Flowers. These are thirteen “whorehouse-temples” whose male and female prostitutes are all sworn to the service of Naamah in various ways. Some houses specialize in delicate beauties who blush and faint, others specialize in types who make their patrons laugh or they specialize in darker arts.

So in this country Phèdre was born, a child who’s rejected from the house she was born into (the delicate-fainter house), most of all because she has a tiny blood spot in one eye. Also known as Kushiel’s dart. It’s the mark of the one chosen by the cruellest of Elua’s angels, Kushiel, who administered punishments to sinners. It also marks Phède as an anguisette.

Phèdre is sold to one of the Thirteen Houses, but only one man recognises Kushiel’s dart in her eye. The house sels her to this man, who is deeply involved in the politics of Terre d’Ange. He sees what she can, and he turtors her in languages, histories and that sort of things. When she grows up she awaits her debut to the service of Naamah. When she starts to work, she has patrons in the wheathy and the powerful of Terre d’Ange’s society and she spies on them. This is the way she’s getting into the politics of the land. These politics lead her into an extremely complex and shocking series of events.

Her master and his other pupil are murdered, so she and Joscelin (the Cassaline Brother) are alone now. Melisande captures them and brings them to Skaldia, where she gets raped and she finds out who are helping the skaldi to invade Terre d’Ange, she even teaches their leader the study’s of Naamah. She and Joscelin escape, when they realize they fall in love, wich is a sort of problem since Joscelin swore to have no sex, but they can’t help it happens. They go to the City of Elua and Prèdre’s friend Hyacinthe helps them out. He helps them to get to the queen without being noticed. When they were gone the rumour spread they had killed Delauney end Alcuin. They tell the queen about the plans of the Skaldi and that there are traitors. The queen sends Phèdre, Joscelin and Hyacinthe to the Straits and to ask Quintilius Rousse for help so they can cross the Straits and ask Drustan mab Necthana (Ysandre’s fionce) for help to win from the skaldi. When they get there they can cross the Straits if they sing a song the Master of the Straits never heard, so Phèdre sings a Skaldi song and they may pass. They help Drunstan to win the Throne of Alba and then they go back to fight the Skaldi. Some man catch a fish and now it’s harder to pass the straits, they have to solve the riddle of the Master. Phèdre almost knows it, but Hyacinthe is faster, he used the Dromonde (a gift from his Mother) and he has to take the place of the Master of the Straits, so he can die after a long time. They go on without Hyacinthe. They win from the skaldi andYsandre and Drustan get married. Prèdre is free of al the rumors and she is the heir of Delauney and thay she became Comtesse de Montrève.