It's not the end of the world door Judy Blume 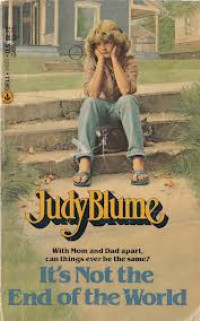 Biographical data
Judy Blume is a popular American author. She has written many novels for children and young adults. She was born and raised in Elizabeth, New Jersey and received a B.S. degree in Education in 1961 from New York

Explanation of the title
Because Karen things, that going divorce is the end of the world.

Short description of the main character(s)
Karen Newman: She is someone who thinks a lot and long about things. She is very afraid that her parents getting divorce.
Jeff Newman: He is the brother of Karen and Amy . He new already that his parents getting divorce. He is very quiet. And nobody can go into his room.
Amy Newman: She is the youngest of all. She ask a lot of questions. And she is also not happy that her father goes away.

Plot
The parents of Karen, Jeff and Amy are argue all the time. One night the father doesn’t come home. The next day Aunt Ruth en Uncle Dan come and take Karen, Jeff, Amy and their mother out for a lunch. When they’re in the restaurant mother tells them that she and their father getting divorce. One time Karen, Jeff and Amy went to their fathers place. Karen meets Val. Val is the girl who lives next door at her fathers place. Val tells Karen a lot about divorced parents because Val parents are divorced too. But Karen don’t want that her parents getting divorce so Karen is makes a plan to get her parents back together. But that doesn’t work. A few days later, Karen hears from her mother that they have to move. They are going to move to California or to Florida. Debbie the best friend of Karen thinks it is very bad, but they decide to write and call to each other.

Narrative structure: chronology, flashbacks; point of view; time span
The story is written chronologically. There are no flashbacks and the book has a first person narrator .


Theme
That is divorce because the book is about getting divorce.

Opinion
Its was a nice book . It was very easy to read. I read this book in two day . if you haven’t time to read a better book I recommend this one.