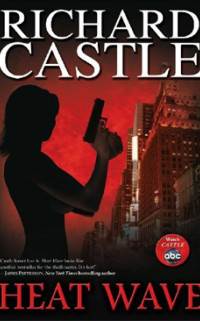 You will think that Richard Castle is the writer of the book, it’s even standing in bold letters on the cover. But is it the truth? No Richard Castle is not the writer of this book. It’s a complex commerce money making. Richard Castle is the character in the TV serie Castle. This TV serie is doing well worldwide. So it’s a good strategic move to let the fans think. Richard Castle wrote the books.Even on the cover of the page is standing. Watch castle on abc. Even the show’s creator said: "Richard Castle wrote the books. The roguishly handsome best-selling author of the Derek Storm mystery series. He's charming. He's a good writer. And I don't know why you're trying to take credit away from him. The guy worked hard on it."Fans do not believe it and neither do I. But who is then the real author?

Should I make a investigation of it? Even on google the answer is not founded yet. Fans believe it’s the work of Stephen Cannell. But there are more names. I can’t tell about the author because no one knows who  the real author is . Funny right? A book about to solve strange cases but they can’t even figuere out who wrote it.

Resume of the book

Nikki Heat is a detective in New York City investigating the death of  the hubsband from Kimberly Starr. He jumped or is thworn from the balcony of his posh apartment. Detective Raley made a funny joke of it “It’s raining men” he said. The apartment is filled with artwork worth millions of dollars.The man had a young son, a Scandanavian nanny and a Botoxed wife. That spended her money faster then Beyonce.Matthew starr has his high rise real estate office. But not filled with furniture and he also doesn’t like workers in his building.He trusted only one man named Noah Paxton. Noah had been trying to keep Matthew Starr’s business afloat for years but things were going down fast. Nikki Heat working at the NYPD, in New York city has the job to investigate this homicide with her team. Pulitzer Prize wining journalist, Jameson Rook is joining her team. He wants to make a magazine report on NYC’s detectives. In the beginning I was thinking his wife murdered Matthew because she wanted the money that she will get on the arworks. I Was close they found out that Kimberley star had another life before this,she was a prostitue and had another name. That made the team think she was it. Kimberley star had alot of affairs in 7 years but Mathhew and Kimberley were still together. You can read further in the book that Matthew even had affairs. Noah felt sorry for the child and made in secret a bank account where he put some money from Matthew star on,for the study of their son.The affairs that made it more impossible to find the killer.Afther a while they found DNA of an Russian man named Pochenko. But there was no effidence he murdered Matthew star. That evening Pochenko broke in the appartment of Nikki. She was taking a bath and heard someone’s footsteps. But before she knew it Pochenko was trying to kill her while she was naked. It was a weird scene I skip further. Detective Ochoa was sitting days, watching the surveilance camera’s looking at some effidence, but there were no results. Lauren a friend of Nikki helped her alot she is a dectective too. One point there started working together because the case of Lauren is linked with the case from Nikki. A woman that is an art historian is murdered and is killed with the same ring weapon as Matthew Starr. They checked the affairs of Matthew and came by a young woman that worked  with Matthew she started her own Cupcake store. But she had nothing to do with the homicide. Rook was trying to get more effidence and watched the surveillance video. He saw that Pochenko diddn’t had a ring on.It was the same ring were the art historian is killed with. They found it under the front seat in the car. Were the woman was murdered. Noah was helping solving the case If Nikki needed something Noah helped.

Nikki and Rook where bullying eachother the whole time in the book. Rook was her little puppy that she can command. Rook diddnt liked that. The time flows and Rook liked Niki more then a colleague. He tried serveral times, to get Nikkis attentions but it diddn’t worked the most times. He invited her on poker night. Nikki enjoyed it and met some good loyers she can use solving the case. On one eavening the city was dark because the  electricity network fell off. It was verry heat even some roads were closed because of the heat. Rook chased Nikki and wanted to be with her his argument was, he needed some Ice cubs from her. Nikke diddn’t hesitate this time and let hem in. They were drinking together and after that they were having sex.It was not only because of the alcohol. They loved eachother for real. But that night someone had stolen the whole art collection of Matthew Starr. Kimberly was helpless. She wasn’t home when it happened. Another case to solve. Kimberley  bought suddenly a Piano told the Nanny she said it was for het son. But she diddn’t have any money.  A gate keeper canceled his shift on the night when the network fell of. Nikki had a bad feeling about it.

She tried to let him speak but he was under drugs and wanted a lawyer. It was suspices that he left his duty exactly on the moment of the burglary.

Kimberly hired the gate keeper, to help with the burlary. The team found out the money Noah has safed used it for his self. If Matthew bought a painting Noah bought a replacement of it and sell the real one’s ( not all of them). Also he hung the replacemens in Matthew appartment. Matthew diddn’t know alot about historcial paintings. He was only about the money so he wouldn’t notice it there were hanging fakes. Noah hired Pochenko and his friend to kill the art historian, Nikki and Matthew.Noah wanted also the paintings  but he was too late Kimberly already stole it. Nikki arrested Kimberly for stealing the paintings. She asked Kimberly  to call Noah. She must tell him were the paintings were. The funniest part is the paitings went  never out of the building. There were hiding in the Piano in the basement. Noah came for the paintings, Nikki and her team tried to arrest him but he was aiming a firearm on her head. When she escaped from him, he was running fast at the hallway and aimed his firearm on Rook this time. Nikki tried to do something but if she set one step forward Noah would have killed Rook. “ I wish Pochenko has finished you that night” and Noah looked at Nikki. When Rook heard that Pochenko has lay his fingers on Nikki. He went mad and unmastered Noah. He shut Noah down. And Nikki and her  team arrestedn Noah. OutsideRook and Nikki were making out in the heat wave.

Heat and Jameson Rook They are a good team together and I enjoyed they conversations in the book.

I Love how straight away  Nikki is. She strong minded a powerful young lady. Her mother is murdered on Thanksgiving eve. Nikki forgot to buy some cinnamon. She called her mother asking if she need anything from the store. But she didn’t get a response back. Nikki heard how her mother has been killed. They have thrown her mother against the refrigerator. Nikki can hear the sound of the smack and remembers It every day. She give up her dream and started to study on crime investigations. I love the way she choose rook In the end. I hate her in the beginning because she was a sexy girl who still slept with her ex in the gym. But she is kind and sweet,  the kind of girlfriend that boys wanted.

He is a handsome guy with a sense of humor.  I tought he is going to give up, he was trying so hard, but it was worth it he didn’t gave up on her and there are happy together. Rook is a guy where you can enjoy your time with. He loves to tease. Also he is a flattering person.

Favorite line in the book

I like it because this part you can read what Nikki is really thinking, when she was chasing in a police car a suspect. I  was laughing when the line came with jams, daredevils, sons-of-bitches, and the unaware. I didn’t expect that the writer will put in a line like this. It really surprised me.

why I recommend this book

I recommend this book this book because, its enjoyable, understandable. You can read what they are really thinking. It don’t have standart casual words in it. The story is well done, you really want to know who murdered Matthew Starr. And I believe that everyone can admit that this love story was better than twilight. It was fun to read how two people can tease each other so much that It can turn out in a real relationship. And that people will do everything to get money. Even when it turns bad for a child. If you are a Castle fan don’t expect too much of it. It’s a great story but it’s not that good as the TV Serie Castle itself. Many people do say that the Characters were replaced in the book for other names. For the record, I don’t think so I watch Castle and my opinion Is that characters are different in some ways. I even Like Nikki more than Beckett in the Tv serie. Beckett hate teasing more than Nikki. And Richard  isn’t that Charming guy as Rook is.

I have really enjoyed this book and I will for sure read the next part. I already f put my opinion in the recommend part. I was shocked that Kimberley or the Nanny didn’t kill Matthew. I really didn’t expect it was Noah, because he was helping so much and was so friendly. I hope that the next part is more enjoyable like this one. I hope I will find out who the real writer is.