Harry Potter thinks he is an ordinary boy. He lives with Uncle Vernon, Aunt Petunia and cousin Dudley, who make him sleep in a cupboard under the stairs. Then Harry starts receiving mysterious letters and his life is changed for ever. He is whisked away by a beetly-eyed giant of a man and enrolled in Hogwarts School of Witchscraft and Wizardry. The reason: Harry Potte…

Harry Potter thinks he is an ordinary boy. He lives with Uncle Vernon, Aunt Petunia and cousin Dudley, who make him sleep in a cupboard under the stairs. Then Harry starts receivin…

Harry Potter thinks he is an ordinary boy. He lives with Uncle Vernon, Aunt Petunia and cousin Dudley, who make him sleep in a cupboard under the stairs. Then Harry starts receiving mysterious letters and his life is changed for ever. He is whisked away by a beetly-eyed giant of a man and enrolled in Hogwarts School of Witchscraft and Wizardry. The reason: Harry Potter is a wizard! 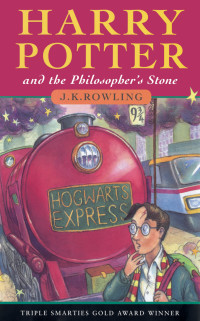 Luister nu!
Mr and Mrs Dursley, of number 4, Privet Drive, were proud to say that they were perfectly normal, thank you very much. The Dursleys had everything they wanted, but they also had a secret, and their greatest fear was that somebody would found it out. They don't think they could bear it if anyone found out about the Potters. Mrs Potter was Mrs Dursley’s sister, but they hadn’t meet for several years, in fact, Mrs Dursley pretended she didn’t have a sister, because her sister and her bad husband were not Dursley. The Dursleys had a normal day.

When they woke up the next day, Mrs Dursley went outside to get the milkbottles, but she found a boy on the doorstep. That was Harry Potter, the son of Mrs Dursley’s sister. Ten years later had passed since the Dursleys had woken up to find their nephew on the front doorstep, but Privet Drive had almost not changed at all. Only the photographs on the fireplace really showed how much time had passed. Yet Harry Potter was still there. Aunt Petunia was waked up and it was her voice which made the first noise of the day. At breakfast something unusual happens. Harry went to get the post. Three things lay on the doormat: a postcard, a bill and a letter for Harry, and it was good adressed, so it couldn’t miss:

The Cupboard under the stairs

Harry can’t have it, and Uncle Vernon has burned it for some reason. The next weeks 200 letters arrive. And the sender comes to him.

It’s Hagrid, the keeper of the keys at Hogwarts School of Witchcraft and Wizardry. Harry finds out that his parents don't die in a carcrash, but were killed by the on of the most bad wizard in the world: Voldemort. (also known as You-Know-Who) His aunt and uncle lied to him for 10 years, because they didn’t want a wizard in the family.

Hagrid takes Harry to London, because there’s Diagon Alley, where witches and wizards get their stuff. Harry’s parents had left him a small fortune, so he can buy his schoolstuff.


On September the first, Harry’s going to London again, to platform nine and three-quarters. The ‘Hogwarts Express’ leaves from there to Hogwarts School for Witchcraft and Wizardry.

At Hogwarts he’s sorted in one of the four houses (Griffyndor, Ravenclaw, Hufflepuf and Slytherin). He gets two very good friends, Ron Weasly and Hermione Granger. He likes it a lot at Hogwarts, and he is choosen to play Quidditch, a wizardsport played on broomsticks. With his friends, he gets to know more and more about the Philosopher’s Stone, and with that stone, you can live as long as you want and get as much money as you want. They found out about the protection of the stone. They think a professor at Hogwarts, Snape, Potions master, is after the stone. And then, when Albus Dumbledore is gone for a few days of the Ministry of Magic, Snape goes through the trapdoor. He’s almost near it, so they go after him. They have to pass a lot of protections, charms and even a troll. Then, Harry’s alone, because Hermione and Ron are going to get the Headmaster, Albus Dumbledore.

But when he arrives at the stone, it isn’t Snape who’s after the stone, but professor Quirrel, Defence against Dark Arts teacher. He on Voldemort’s site and has to get the stone for him, so Voldemort can get his power back. (Voldemort wanted to kill Harry when he was little, but it didn’t work, and in a mysterious way, he lost all his power)

But Albus Dumbledore was back just in time, to help Harry. Harry’s nearly to be killed. At the end of the schoolyear, he’s brought back to London with the Hogwarts Express.