Harry Potter is preparing to leave the Dursleys and Privet Drive for the last time. The future that awaits him is full of danger, not only for him, but for anyone close to him - and Harry has already lost so much. Only by destroying Voldemort’s remaining Horcruxes can Harry free himself and overcome the Dark Lord’s forces of evil. In a final and perilous j…

Harry Potter is preparing to leave the Dursleys and Privet Drive for the last time. The future that awaits him is full of danger, not only for him, but for anyone close to him - an…

Harry Potter is preparing to leave the Dursleys and Privet Drive for the last time. The future that awaits him is full of danger, not only for him, but for anyone close to him - and Harry has already lost so much. Only by destroying Voldemort’s remaining Horcruxes can Harry free himself and overcome the Dark Lord’s forces of evil. In a final and perilous journey, Harry must find the strength and the will to face a deadly confrontation that is his alone to fight. 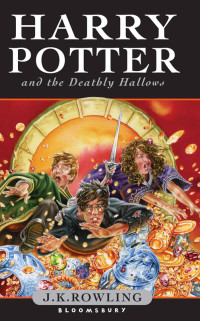 Following Dumbledore's death, Voldemort has completed his ascension to power and gains control of the Ministry of Magic. Harry, Ron, and Hermione drop out of school to find and destroy Voldemort's remaining Horcruxes. They isolate themselves to ensure the safety of their family and friends. They do not have much knowledge about the remaining Horcruxes, but by doing a lot of research and search in a lot of places they are going to learn more about the Horcruxes and where they are. When they find them, they can destruct them, and when they destructed them all, Harry will be able to kill Voldemort.
The begin;
Harry is still home; his aunt and uncle are going to a safer place, so Voldemort can’t find them. When they’re left, harry goes together with the members of the order of the phoenix to Ron’s house to join the wedding of Ron’s brother. But flying to Ron’s house isn’t easy, there are a lot death eaters waiting for them.
They follow harry and the Phoenix members and try to kill them. When everyone has shaken of the death eaters they arrive at Ron’s home. But when they think everyone is save, except Ron’s brother George who has lost an ear, they find out Mad eye Moody is killed on the way to the house. After being sad about his death, they are preparing for the wedding.
At the wedding the death eater comes entering the wedding, so harry, Ron and Hermione must fly, and they fly to London.
The end;
Harry and his friends has destructed almost all the Horcruxes, they must destroy the Diadem of Ravenclaw which lies probably at school, so they’re going there.
Whey they are there, his friends are all happy that he is there, they think he came to safe them. But that isn’t true, harry comes to destroy the Diadem of Ravenclaw. After explaining everything to his friends, harry goes looking for the diadem. When he’s in the Ravenclow’s common room, there is a death eater who sees harry and warns the dark lord. Who comes to Hogwarts, together with a lot of other death eaters.
All the pupils of Hogwarts have the choice; ore leaving, ore joining the fight to protect harry and the school. A lot of pupils are joining the fight. When the fight starts harry goes looking for the diadem. ‘He found it in the room of requirement. When he comes out, they were still fighting. Harry goes looking for Voldemort, when he’s found him, he sees that Voldemort kills Harry’s evil Professor Snape, when Voldemort has left, Snape said to harry to take his memory’s. When harry watched his memories, he found out that he must been killed before Voldemort can be killed.
So harry decides to surrender, and he goes to Voldemort, so he can kill him.

Climax and anticlimax;
The climax is the battle in the end of the book, where the entire series is all about, the moment harries or Voldemort get killed.
The anticlimax was that harry was killed before Voldemort, but when he returns to earth and kills Voldemort, that’s a climax

My opinion of the book;
I thought the book was absolutely amazing, I already read it a long time ago, but I really enjoyed reading it another time, because I’ve forgotten a lot of things, so I really liked it.
The book was stunning and beautiful, because there are happening a lot of things you don’t expect to happen, and that makes the book so stunning, and the way the book has been wrote, is also amazing, because there are a lot of details told, without it been annoying.