Goodbye to all that door Robert Graves 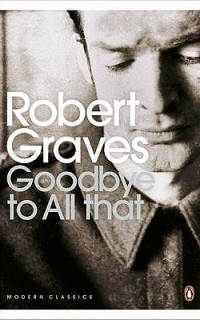 Goodbye to all that

"So I went abroad, resolved never to make England my home again; which explains the “Goodbye to All That” of this title." (P. 356)

I believe this title is connected to the story in another way. Robert writes about his life in a very organised way. First about his time travelling around, later about him going to school at Charterhouse. At chapter 7, Robert starts to write about him signing up for the war. After about two-thirds of the book, the war is over and Robert begins to speak about his after-war life and with that about all the trauma he is suffering from.

The way the book is organised, really explains the title to me. It starts with his youth then he abruptly moves on to his wartime story. Next he leaves that part of his life behind, marries and has four children. Finally, he separates from his wife. He says goodbye to all that’s behind him, all that has happened in the past.

Robert also says goodbye to the English society. He doesn’t want to be a part of it any more, as he says in the book.

In this summary I discuss vital parts of the story. Most of the fictional books contain a clear climax. This book doesn't, because it tells a real man's life story. The book is divided into three different parts. The start of Roberts life, his life during the war and his life after the war. Therefore, I decided to summarise the book into those three parts.

Start of the book

A little bit later he finally reclaims some of his reputation after joining the schools boxing competition. He also gets to play football, which makes him much more popular too.

The second part of the book starts on the day he signs up for the British military. He completes the officer's school at the special reserve right away. Robert clearly has trouble commanding far more experienced soldiers, because Robert is way younger than they are. He finds it hard to make those men do as he tells them to do.

The war continues and Robert is sent to the first front. What he encounters there, does have an impact on Robert. Even though he doesn’t recall it in the story anywhere except on the moment itself. The first corpse he sees on the battlefield is one of a suicidal man. The man first lost a big part of his battalion. After that he received word that his girl got sick. This was too much for him and he committed suicide

He recovers quickly. He goes to some social events while being back in England and meets veterans, some due to age, some due to injuries. But Robert doesn’t seem to be moved by this. He’s even glad to be sent back to the trenches. He didn’t like his time back in England:

He is sent to the front for the second time. This time near the river Somme. He meets a new good friend, named Siegfried. They both like poetry and really get close.

A few months later Robert is hit during combat again. This time in his chest damaging his lung. This injury is too serious and he is unable to go back to war.

He is transferred to a hospital in Oxford and recovers there while realising he probably has survived the war, because he is unfit to be sent back out again. After that he starts to train new soldiers. While training these new soldiers he finds himself unfit for this type of exercise so he goes back to Liverpool to recover once more.

The actual war isn't over yet, but it is for Robert, since he is not fit enough to go back to battle again. In this period of time, he meets his future wife Nancy. They decide to get married. During this time in his life he struggles most with all his traumas and other difficulties he suffering from. Most of which are cause by the war.

After they get married they get four children. Robert decides to go to university again and he graduates on English literature. He feels lost in society during this period. He lives but doesn’t understand the rules of society since he has been living in the trenches his entire life. After his graduation, he lives with his wife and four children for a number of years. Meanwhile, Robert starts cheating on his wife but he ends the affair. He gets a job offered in Cairo so they move to Egypt.

Robert and his wife get into a lot of arguments after moving to Egypt so they finally decide to split up. Robert doesn't like Britain at all so he moves to Mallorca. On this point in his life he acknowledges all the pain he has gone through and resumes his life with a view on the future. This is the end of the book.

Another big theme in this book is the psychological impact of the war on Robert. This is because he does pay a lot of attention to his mental health, but only in the last part of his life and the last part of the book. The first two parts of his book very much describe the events in his life , whereas the last part is a lot more about his feelings and thoughts.

My goal is to find out how the main character in this book deals with his war memories. He might try to ignore them or just cut them out of his memory.

I found that Robert does have some problems with his past at first. He mostly struggles with all the trauma caused by the war. Later on, he does accept his past in a way that he acknowledges that everything that happened was very sad, but that he is ready to move on.

At the end of the book, Robert talks about himself feeling like being in a warzone while actually being at home with his wife. This points to a post-traumatic stress disorder, as he sees strangers as if they are his killed war-friends and when he climbs a hill he can only see the area as a Warfield. This proves he has problems dealing with his past at first.

“I was still mentally and nervously organized for war; shells used to come bursting on my bed at midnight even when Nancy was sharing it with me; strangers in day-time would assume the faces of friends who had been killed. When I was strong enough to climb the hill behind Harlech and revisit my favourite country I found that I could only see it as a prospective battlefield. I would find myself working out tactical problems, planning how I would hold the Northern Artro valley against an attack from the sea, or where I would put a Lewis-gun if I were trying to rush Dolwreiddiog farm from the brow of the hill, and what would be the best position for the rifle-grenade section.” (P. 298-299)

This second quote is meant to make clear that Robert didn’t just suffer from his war-memories, but that he also didn’t know a regular “independent civilian life”. From school he went straight to war. All he knows is a life during a war. He has to learn how to fit in society when there is no war.

"I found it difficult to believe that the war was over. When I had last been a civilian I had been still at school, so I had no experience of independent civilian life." (P. 298)

My third quote is meant to show that Robert, after all he has been through, still carries on his memories and story, and will have to deal with it through his entire life. This quote proves he did accept his past later in life. It feels like he was killed at 23, but he is also able to see what can still be done at the age of thirty-four. He overcame his past and is able to look back on it, as one complete memory, his legacy. In my opinion, particularly the last thing he mentions is very important for him. To see a corpse that has died a natural death. Meaning he never saw anyone die from old age, only people who were shot, who committed suicide or died due to a disease.

"I had, by the age of twenty-three, been born, initiated into a formal religion, travelled, learned to lie, loved unhappily, been married, gone to the war, taken life, procreated my kind, rejected formal religion, won fame, and been killed. At the age of thirty-four many things still remain undone. For instance, I have never been on a journey of exploration, or in a submarine, aeroplane or civil court of law (except a magistrate’s court on the charge of ‘riding a vehicle, to wit a bicycle, without proper illumination, to wit a rear lamp’). I have never mastered any musical instrument, starved, committed civil murder, found buried treasure, engaged in unnatural vice, slept with a prostitute, or seen a corpse that has died a natural death."

(This quote is from an epilogue from an older version of the book. This quote wasn't found in the paperback book, it was written in the eBook. Therefore I sent the eBook with this document. This quote can be found on the last page of this eBook.)

Andere verslagen van "Goodbye to all that door Robert Graves"