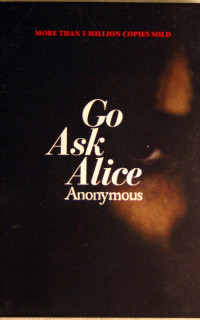 Luister nu!
Go Ask Alice
1. The title of the book is ‘Go Ask Alice.’ The book has 162 pages.
2. The book is called Go Ask Alice because that’s the name of the main character. Which you can only tell for sure because of the psychologist’s comment in the back of the book where her name is stated Alice.
3. The author remains anonymous, the book is in fact the author’s diary and she died  because of a drug overdose just 3 weeks after deciding to stop writing in her diary.
4. It was essentially written for herself, as it was her diary. But I think the people who are most likely to read this book are teenagers because the main character is a teenager too.

5. Again, because the book is a diary the writer never intended it to be read by anyone but herself, nor to evoke any emotion from that non-existing reader. She merely expressed her inner most personal feelings and thoughts.
6. The book is non-fiction, because it’s a diary.
7. Alice, the main character. She is a very articulate and intelligent girl but life deeply troubles her and she seeks refuge in drugs, which lead her into a world of sex, abuse and death.
-Jill is not vividly discussed in the book, nevertheless she played an important part because she’s the girl that introduced Alice to drugs.
-Chris spends quite a long time with Alice, she’s also on drugs. Alice and Chris decide to move to San Francisco together to quit drugs and start a new life, without succes.
8. Years in numbers aren’t mentioned in the book but it takes place over a time span of little over 2 years. The book was printed in 1971 so it takes place before that year.

9. There are no flashbacks or flashforwards.
10. The places Alice lived with her parents have been blanked out for privacy reasons but the other places she lived were in Oregon, San Francisco and Denver.
11. Yes, the story was realistic, which makes sense considering it’s a non-fictional story.
12. Alice starts out as an innocent unpopular 15-year old girl. When she moves to a different town she tries to start over fresh and find new friends but that doesn’t work out.
She spends the summer with her grandparents where she gets invited to Jill’s party.
10 out of the 14 people at the party get their drinks spiked with LSD, Alice is one of them. She loves the feeling of it and spends the rest of the summer trying out nearly every tranquillizer, upper and hallucinating drug on the market. When the summer is over and she goes home, she meets a girl named Chris. They become close friends and use a lot of drugs together. When they walk in on their boyfriends Richie and Ted having sex, they decide to run from it all and move to San Francisco.
They find jobs and an apartment there, feeling remotely happy until they go to a party Chris’ boss is having. There, Chris and Alice try Smack, not knowing that Shelia, -Chris’s boss- and her boyfriend had been using Speed and were going to rape and abuse them.
After that, Alice and Chris decide to move to a different apartment and open up a small boutique. Succeeded but lonely they return to they parents, and back to school.
But not for long, and Alice flees to Denver, where she lives with a couple of other drug-addicts, to return back home a month later.
She starts a new diary in the hope of starting a new live.
A couple of weeks later her grandfather dies, and the constant image of his decaying flesh being eaten away by maggots and worms really freaks her out and wears her down,
still she’s not using drugs. The addicts at school keep harassing her and calling her names like Mary Pure for not doing drugs anymore. Then her grandmother dies too, which makes the image of writhing maggots digging through corpses even more vivid and frequent.
After a while things start to clear up for her, some nice clean kids ask her to come to a party and she’s feeling good again.
Then when she goes to babysit at Mrs. Larsen’s house she wakes up bruised and bleeding in some sort of asylum or hospital, with hallucinations of maggots crawling all over her and eating away at her flesh.
After days when the hallucinations have passed she finds out that someone had put LSD on some candy she ate, which made her believe she was being attacked by maggots, after which she had scratched the living daylight out of her face, hands and body and pulling off hunks of flesh and hair.
When the neighbours locked her in the closet to make sure the baby was okay, Alice had tried to claw her way out scratching at the rough plaster on the wall.
When she had healed up enough she was sent to an insane asylum, where she meets a 13-year old girl who had apparently been there for a really long time and who used to be a prostitute and a drug-addict, and still has sex with other patients to obtain things such as cigarettes.
After about a month she’s allowed to go home and it seems like things are looking up for Alice. She writes as if she’s really happy and decides to quit writing in her diary, because in her opinion adults should be able to talk to other people about their problems.
The Epilogue on the next page says she died due to an overdose three weeks after making that decision.
13. I don’t think the title has been rightly chosen because it doesn’t make much sense to me, Who is supposed to ask Alice what? But still the title attracted me, I was actually going to write this report on George Orwell’s ‘Nineteen eighty-four’ so I was just going through the library looking for some casual reading material, something akin to ‘Alice’s adventures in wonderland’, and I caught sight of a different ‘Alice’.
When I read the blurb I expected a book about a 15-year old girl getting involved with drugs, and that’s exactly what the book is about.
The story caught me at the second day, so that’s after about 1,5 pages, because the first part was a bit confusing.
I didn’t like atmosphere of the locations throughout the book, except for the locations described when Alice was high on drugs, such as Jill’s house.
The ending left me feeling a bit at a loss, because she seemed happy at the end of her diary but then I read that she died three weeks later. The realisation that it’s a true story, -Told by the one person who knew everything about it at the time that it happened, and that it’s the pure truth, because there’s no need to lie to your diary- left me flummoxed.
The language used was informal, as she was writing to herself. It wasn’t difficult to read but it would be difficult for someone else of her age to write in such a manner, because she uses words that don’t float near the surface of one’s standard vocabulary.
Excerpt from page 89: “I have lamented until I am dehydrated, but calling myself a wretched fool, a beggarly, unfortunate, woebegone, tormented, afflicted, shabby, disreputable, deplorable human being isn’t going to help me either.”