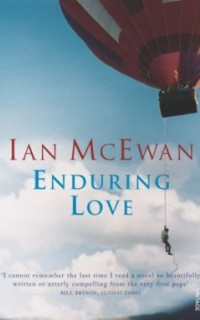 Meld je aan!
The story tells about the life of Joe Rose. He's a 47 years old science writer who lives with his girlfriend, Clarissa Mellon, in London. One day, during a picknick with Clarissa, Joe sees that a balloon has some troubles and he goes to the balloon to help the people within. There are also some other peoples who run to the place to help them: Joseph Lacey, Toby Greene, Jed Parry and John Logan. They do, without saying a word to each other, their best to help the people in the balloon, in vain. The balloon rises and John Logan, who hasn't let go of the rope, falls down in a meadow, of course he doesn't survive this accident. During this operation Jed Parry gets obsessed by Joe, this is the begin of a lot of suffer. Jed is a 28 years old rentier (after an inheritance) and has Clérambault's syndrome, that means that he thinks that Joe loves him too and that Joe started to love him before he loved Joe. Jed writes 3 or 4 letters each week to Joe and he often waits for him outside his apartment, sometimes he follows him. Joe doesn't know what to do, Clarissa doesn't believe him (she thinks Joe writes the letters himself and she never sees Jed outside the apartment because he always hides him for her) and the police can't do anything because Jed didn't do something violent or threathening. One day Jed hires 2 murderers to kill Joe, because he always refuses him, in a restaurant, but the murderers make a mistake and one of them shoots at another man (but the man doesn't die). When Joe sees that Jed is also in the restaurant and that he sends the murderers away, he knows that he was meant to be death. Joe tells this whole story at the police but again they don't believe him. Joe decides to buy a gun, he calls to an old friend (Johnny B. Well) and the next day he has his Browning, Johnny also learns him how to shoot. While Joe is driving, Jed calls him: he's in Joe's apartment and is threathening Clarissa with a knife. When Joe arrives at his apartment they are in the sitting-room. Jed tells him that he regrets his attack of the day before and he wants to be forgiven by Joe, but Joe refuses this. Jed tries to kill himself with the knife but Joe shoots at him to prevent the suicide. They call the police and they put Jed in a psychiatric hospital. Clarissa regrets that she didn't believe Joe and that they relationship hanged in the balance. They adopt a child because Clarissa can't get children and they lives happily together after this adventures. From the hospital Jed continues to write letters to Joe, but the nurses don't send them so that Joe can live in peace.
During the story Joe visits Jean Logan, the widow of John. Jean thinks that John cheated on her because there were 2 doors of his car opened when they found him back and there was also a picknick for 2 persons in the car. Jean asks Joe to call all the people who were involved by the accident, and it's Joseph Lacey who clears up the mystery. John has given a lift at 2 persons: James Reid and Bonnie Deedes. James is a professor (about 50 years old) and Bonnie is a student of him. They have a relationship and James doesn't want that someone knows that because it can damage his reputation, so they ran away after the balloon accident. Later in a pub they met Joseph Lacey and they talked about the accident. Jean is very relieved that John died as a courageous man who didn't cheat on her.