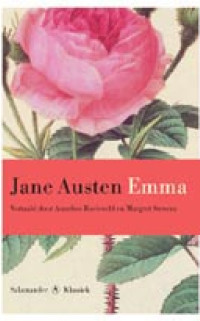 Luister nu!
Emma is a women and she’s 21 years old. She’s beautiful, clever and rich. She lives in a small town names Highbury.
She and her father lives in a house named Hartfield.
She has also an older sister but she’s out house. Her sister lives in London with her husband John Knightley and they’re 5 children.
Her friend Harriet was on vacation last summer.
There met she Robert Martin.
She talks the hole day about him, and he also ask her to marry him.
But Emma doesn’t like that idée, he’s not rich and she thinks Harriet match much better to Mr Elton.

After a while with Mr. Elton to hang up is Harriet totally in love.
And they think its mutual, but that’s not true. He doesn’t love Harriet but Emma! Emma dices to tell Harriet about.
Harriet isn’t happy any more.
And Emma told Mr. Elton that she don’t love him.
After a few days dice Mr. Elton to leave the town, he goes on vacation.
In the meantime people in the town talk a lot of Frank the son of Mr. Weston.
He shall come to Highbury soon.
Emma look forward it.
Meanwhile was Jane arrives by the Bates family. She stays there a few months.
Jane en Emma have met each other earlier but that was not a succes. When Frank arrives in Highbury Emma almost like him.
They have wonderful times together, but Frank must go to his mother suddenly she’s ill.

Mr. Elton comes back in the town but he was married with a women.
After a few time came Frank back but it was not the same as first.
She thinks Harriet like him too, so she let him alone.
She hopes that Harriet and Frank came together.
But she hears later that Frank was ingate with Jane!
She don’t mined for herzelf but for Harriet, she dices to tell it her.
But Harriet isn’t in love with Frank but on Mr. Knightley.
Emma shocked because she has a very good friendship with him.
The day after called Mr. Knightley, he wants to talk with
Emma.
She goes to him and he told her he was in love with her a hole time.
She dices to send Harriet a letter, but first she sends her sister a letter.
Her sister invites Harriet then in London.
Harriet goes to London.
Mr. Knightley asks Emma to marry him, and Emma sad yes.
When Harriet came back out London she has to tell Emma something funny.
She was met Robert Martin in London and they get married!
Emma was surprised but also very happy for her. In September Frank and Jane gets married.
In October Harriet en Robert Martin gets married.
In November Emma en Mr. Knightley gets married.