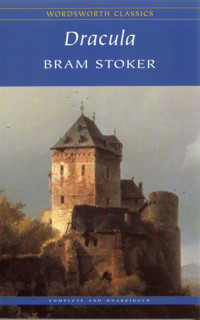 Schrijver: Bram Stoker
Principals:
Count Dracula. The vampire who lives in the castle in Transylanvia. If someone is bitten by Count Dracula, you will be turned into a vampire too. An vampire has a very white skin, sharp teeth and can chance his shape.
Jonathan Harker: he is an lawyer. He is going to Dracula to sell an house in Londen. The count is really rich. He will visit Dracula first. But gets captured.
Mina Murray: She is in love with Jonathan. They will get married. Mina will find Jonathan if he is captured by Dracula.
Lucy Westen and Arthur Holmwood. Are best friends from Mina and Jonathan. Lucy and Arthur are in love too.
Lucy will be bitten by Dracula, and chances to an vampire. Everybody will help Lucy to chance back to a human. They defeated Lucy and her soul went to heaven.

Summary:
Jonathan Harker is a young lawyer. He is sent to Count Dracula who wants to move to London. Jonathan and Dracula are becoming good friends and Dracula asks him to stay a week longer. Jonathan agrees. But one day when Jonathan was shaving himself, Dracula entered the room, But jonathan couldn’t see him in the mirror. Jonathan cuts himself and he saw how Dracula was looking to his blood. That’s when he knew something was wrong. After that week Jonathan wanted to go home, but Dracula didn’t let him go. He was a prisoner in Dracula’s house.
One day when he woke up there were three woman around him, and one was very close. She wanted to bite him, but Count Dracula grabbed the women. Dracula saved Jonathan. Now Jonathan was positive. He’s living in a house with vampires. Dracula gave him paper and pen so he could write to his girlfriend Mine.
Honathan managed to escape and went to an institution in England. When he was able to go back to London, Dracula has already arrived there and made a victim, Lucy, A friend of Jonathan’s wife. She was very weak and her doctor, Jack Seward. Didn’t know what to do. So he called in the help of his friend. Mentor Abraham Van Helsing( From Amsterdam ). He knew what was wrong with Lucy, but couldn’t save her. She died, and then chanced to a Vampire. After her funeral a lot of children disappeared and were found back with two red marks in their necks. Van Helsing was convinsed that Lucy had attacked the childen. they went looking for her with two more man. When they found her Van Helsing drove a piece of wood through her heart, cut of her head and put garlic in her mounth. So she would never become a vampire again and her soul could rest in peace.
But they weren’t finished yet. They had to kill all the orther vampires and most of all Count Dracula.
They managed to kill the orther vampires, but to kill Dracula. they needed to go back to Transylvania. On there way the count attacked Mina. they weren’t able to kill the Count. And so Mina will be turned into a vampire too. It wouldn’t take long.
The man arrived at the castle before Dracula could get there. When Dracula arrived it was daytime. So he was lying in his coffin. But it was getting dark already, so they haven’t got much time left. The man opened the coffin and putted a knife in Dracula’s heart and he turned into grey dust. Mina almost turned into a Vampire. But she was rescued when Dracula was killed. And everything became back to normal.