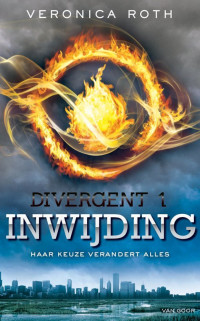 Tris is a small and narrow girl from Abnegation. She is blonde and very insecure about herself and who she really is and/or should be. When she find her confidence in Dauntless she finds eventually herself.

Four is a young man who is already for two years at Dauntless when Tris got there. He has to train the transfers, and he gets interested in Tris, but stays away. He is very mysterious and has a lot of trouble with it let go of his past in Abnegation.

Peter is a Candor transfer and always very irritating against Tris. He often scolds her for Stiff and together with Drew and Molly he makes her life on the Dauntless training acid.

Christina is also a Candor transfer and is best friends with Tris as soon as they arrive. She is tall and has black short hair, and actually feels right at home in Dauntless.

Will is an Erudite transfer with blond hair. He is tall and big and if he starts to talk with Tris he is allready equal in the friendship circle.

Al is a large, long and strong boy with a great uncertainty. He falls in love with Tris but she sees him not like that and through all the tensions he gets in a depression.

Eric is one of the Dauntless leaders and often comes a look at the training of the transfers. He has soon an eye on Tris coined by her big mouth. He sat together with Four in transfer training and was defeated by Four. Since then, he does everything to beat four.

Caleb is the twin brother of Tris and has always fit perfectly in his faction. Yet he prefers Erudite on choosing ceremony. He is very much satisfied with his choice but if he finds out what's going on he soon goes away.

In the world of Beatrice in the world devastated by war, only the city of Chicago still seems to exist. The founders have the city divided into 5 different factions called: Amity, Candor, Erudite, Dauntless and Abnegation. Beatrice lives in the faction called Abnegation, with her parents and twin brother Caleb. Everyone must take its 16e a test to see which faction they fit in best, they call that test also the aptitude test. Beatrice and Caleb must take this test also, but at Beatrice, things go wrong. Her test results are unclear, she is divergent. Divergents are dangerous for society and are usually equal executed. Beatrice has no idea what Divergents are and is referred to by Tori, her test customer, right turned away without explanation. Beatrice must choose, the next day a faction on the choosing ceremony, despite her test results. The next day as her brother choose first, he chooses to leave his parents for Erudite, despite the political differences between Abnegation and Erudite. Beatrice feels forced to stay at her parents faction, but she chooses Dauntless and leaves her family. If she wants to join with the others she needs to do with the Dauntless initiates first  a few tests to the Dauntless headquarters to see how brave they are. Here she meets Christina. Arrived at the Dauntless headquarters they must jump off a roof and eventually she falls in a net. After her fall she gets out pulled by a young man named Four. After everyone is downstairs they get a tour of Four throughout the building. If they have seen all, the new members are warmly welcomed, by the other members of Dauntless. If the next day their training begins, they come to know that these three parts: a physical, a mental and a test with both. There is also a ranking list, which determine who drops out after each part of the training. Tris already knows she is one of the weakest and that she probably is not going to make it at Dauntless. Lucky for her she makes is to the next phase of training by showing her braveness. After the first phase of the training there is a visiting day. Tris doesn’t expect anyone for her, but when she sees her mother she is very happy. But, her mother is mysterious and vague. She asks Tris if she wants to go visit her brother to investigate a serum and leaves. With a strange feeling Tris goes to bed, but wake up by a screaming Edward who has a knife in his eye, while he just got first of the training. Because he can't see he is sent away and is peter first. At the mental training Tris goes fast to top, because she can manipulate the simulations because of her divergence. During this training Four discovered she is divergent, and he protects her because he does not want something bad happens to her. This grows their band, and they start to develop feelings for each other. As Tris wakes up on a night, she hears Eric talk to Jeanine and she finds out that Jeanine controls much more than she should be able to. Then she suddenly get caught from behind and almost get thrown in the chasm by peter, Drew and Al. Then saves Four her just in time, they're staying at his place for her safety. If Al try’s to excuse to Tris, she doesn’t forgive him and she says: "if you ever come close to me again i will kill you, you're a coward."

The frustrated All runs away and a few hours later he has found dead in the chasm. Tris gets here a guilt of this and comes again into contact with Four, and to which he let her in his fear landscape to show who he really is. She sees here that he the abused son of Marcus, the leader of the factions, and begin their relationship by a kiss down into the chasm. If Four the next day very aloof does Tris doesn’t knows why, and goes frustrated visiting her brother. He also act very strange and distantly. She asks him to the serum and goes more frustrated than she was back to Dauntless. If she gets there Eric is already waiting for her because she was sneaked out, Four helps her with an excuse and they finish there fight. If Four tells her what he has heard about a plan of Jeanine, to destroy Abnegation, they know that they should stop them, but Tris should also prepare for her final test. She has different fears this test like; fear that she is all alone and that Four is only using her. When Tris completes her test successfully, she gets to hear that she is finally Dauntless, but she also gets a strange injection what supposed to be an tracking device, and when they held a party Tris kisses Four so everybody knows about them. Later that night it all changed suddenly in a hell when everyone contributes to a war against Abnegation, but without knowing this by the injection they had received earlier. However, is Tris not in this simulation because she is immune thanks to her divergence, but must play the game along so she will not be discovered. When she passes through the crowd she finds Four, and finds out he is immune, so he is also divergent. When they arrive Tris has to find her family quickly so nothing happens to them. As Tris and Four are discovered, Jeanine lets Tris being executed and injected Four with a serum which make him sees his enemies as his friends and his friends like his enemies. As Tris thanks to her mother escaped her death, her mother dies on the way to their hiding place. When she gets there they make a plan to stop Jeanine and Tris goes along with Marcus, Caleb and her father to stop the simulation. If they find peter Tris shoots him in the leg so will tell them where they controlling it from, and he shows them the way to the control room. When she gets here she sees Four and because he doesn’t recognize her they fight till he breaks his simulation and recognize Tris again. Then Four and Tris destroy the data together so the Dauntless aren’t controlled by the simulation any more. They still needs run, for corrupt Dauntless soldiers and go by train to the amity headquarters, where they hopefully find a place to shelter.