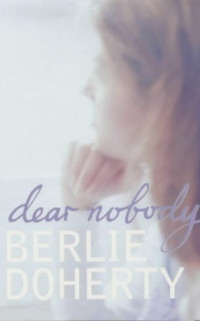 Author: Berlie Doherty
First published in: 1994
Main Characters:
Helen is a girl, she is 17 years old, in the story she’s pregnant, and she has long brown hair, she wants to be an independent woman.
Chris is a boy, he is also like 17 years old, in the story he is the father of the child of Helen (and Chris), he misses Helen very much when she leaves him.
Amy is the baby of Helen and Chris and she is a girl.
Title explanation:
Dear Nobody is the baby that lives inside Helen. Helen writes letters to the baby and above those letters she writes Dear Nobody.
Summary:
Helen and Chris are in love with each other. They are very close and they sleep together. Helen has the feeling that she is pregnant so she buys an pregnancy test. The test comes out positive so she isn’t pregnant, but she still isn’t sure of it. She buys another pregnancy-test and this one comes out negative, she is really pregnant. She tells Chris and he is very shocked. They decided to keep it al secret. Then her mum finds out about it, they talked and talked and Helen has to geo to an abortion clinic, to take away the baby. While she is lying there she thinks about a letter of Chris, he writes: to say her that he doesn’t agree with her doing an abortion because she will take away a live. She just goes out of the surgery room and goes home. Helen is going to ride a horse, she goes faster and faster and she reaches the beach, where she falls of he horse on purpose, because she wants to cause a miscarriage. That doesn’t work. She starts writing letters to the baby. Chris and Helen aren’t very close anymore and her mother doesn’t want them to be close. There is a party in June and Helen and Chris go there. Helen breaks their relation because she want to take care of her child on her own.
Chris goes on a holiday to France with his friend Tom, on the mountain bike. They meet two very nice girls. They have a nice time together. When they’re back in the county Bryn, that is the name of the girl on the vacation, comes by. They fall in love. But Chris still thinks of Helen. It’s October and the baby must come soon. The mother of Chris, who ran away when he was a little boy, send a letter to Helen telling her that she will pay her money for bringing up the child, but that she wants to see her grand-child.
The baby is born, Chris and Helen are really split up, bus Chris was with the birth of Amy.
Helen send all the letter that she writ to Chris so he could feel how she felt when she was pregnant.
Information about the author:
Children's author Berlie Doherty was born in Knotty Ash, Liverpool, on 6 November 1943. Educated at Upton Hall Convent School, she read English at the University of Durham, graduating in 1965. She completed a postgraduate certificate in Social Science at the University of Liverpool in 1966 and a postgraduate certificate in Education at the University of Sheffield in 1978. She received an honorary doctorate from the University of Derby in 2002. Her first book, Requiem, took her over ten years to write and was published as her first novel for adults in 1991. She worked as a social worker, a teacher and a schools broadcaster for BBC Radio, before becoming a full-time writer in 1983. She has travelled extensively in America, Australia, Europe, Asia and the Middle East speaking at conferences and literature festivals as well as in schools and universities.