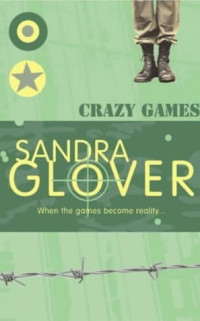 Meld je aan!
Crazy Games - Sandra Glover
Brad is a boy with an obsession: agressive video games. His friends and family don't like that, especially his girlfriend Stacey. Stacey is very dominant and Stacey and Brad grow more and more apart. Brad borrows the newest game stuff - the 'blast-pac', a kind of jacked when you can feel the shots in your body and the 3d-visor - from Colford. Colford is a little younger than Brad and he is a strange and lonely boy. His dad hits him sometimes. He talks to a statue of the men who set up their school, Barnaby Merrick. Mr Merrick was a good father to his son, and that's probably why Colford is so interested in him. Brad tries to help Colford a bit and plays video games with him. Colford's father doesn't want Brad to borrow Colford's stuff, and when Brad does he hits Colford again. Brad hears that and calls the police. The police can't do anything. Colford is really angry with Brad, because he thinks Brad's trying to seporate Colford from his father. Therefore, Colford goes to school one day in a First World War uniform and with a gun which belong to his father. He shoots at Brad, but Brad's only shot in his shoulder because he's pulled backwards by someone. Afterwards, they hear that Colford also has shot his father down. His father didn't survive. Brad is really impressed by what has happened. He thinks it's his fault. But Stacey tries to help Brad and cheer him up. They get together again.