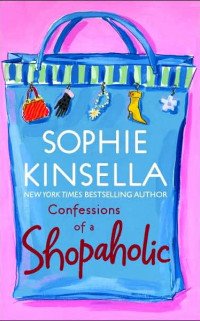 Luister nu!
Title: Confessions of a shopaholic
Author: Sophie Kinsella
Summary:
Rebecca is a young woman, around twinty-five years old, who loves to shop. She’s a financial writer for Succesful Savings magazine, where she tells people how to use their money properly. But as soon as she is done on her job she goes out to get the best stuff from Prada, Dior and Chanel. Her wallet shrinks and shrinks, while her debts grow and grow. She makes up excuse after excuse to Visa and the bank, she calls them her stalkers.
Another main character is Suze. She is Rebecca's best friend.

Luke Brandon. The man who Rebecca doesn’t like in the beginning of the book, but on the end they go to dinner together. And in the next book, which I have read in Dutch, they get married.
Tarquin. Nephew of Suze who is in love with Rebecca. But Rebecca isn’t in love with him. He is a millionair.
After a while she understands she has to do something about her life, it can’t go on like this.
So Rebecca decides to start Cutting Back.
She’s going to stop buying things she can’t afford, and is going to save enough money to pay back all her debts.
But after a few days without shopping she feels so horrible, she has to buy something to cheer herself up. Just a little something.
When she wakes up the next morning and she sees what she’s bought, she decides Cutting Back isn’t the way.
Her new goal is to Make More Money.
If she just makes more money she can buy what she wants and pay her bills both at the same time. The only question is, how is she going to make more money?
She tries out all kinds of jobs, but doesn’t seem to be able to handle any of them.

And she doesn’t win the lottery either, as she expected.
In the mean time she also has trouble with her love life.
Although she denies, she’s madly in love with the head of the rival firm, Luke Brandon.
Then, she discovers a big scandal in a firm which Luke Brandon’s firm supports.
The Morning Show asks her to appear in their show and talk about what she’s figured out.
And she’ll get a lot of money for it.
All her trouble will be over.
But the happiness fades away quickly, when she sees against who she has to compete on television. It’s Luke Brandon.
Although she wants to die, she does very well during the discussion.
And she’s being asked to come back in the show every week, to answer people’s questions about how to manage their money!
And when Luke finally asks her out, they have dinner together.
In the evening it’s too late to go home, so they slept in the hotel from the restaurant. But the next morning Rebecca realizes her life turns out to be a real fairy tale… and that’s the end of the book.
Rebecca has a meeting with Derek Smeath, that’s the bank director. The meeting goes about how she will pay all her bills, she never can pay.
But now she earns a lot of money with the television show and she can pay all her bills.
The meeting is on nine-thirty, the morning after Rebecca and Luke slept in the hotel.