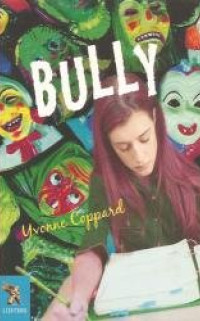 The book itself
Genre: Reality
Perspective: The story has been told in the book.
The declaration: The title of the book is Bully. Bully means in Dutch plague head and the complete tale therefore also concerns a little girl who is teased by a group of boys.
The time in which the story takes place: the tale takes place in this time.

Characters:
Kerry Hollis: Kerry are a little girl with dark its, she runs lamely because a car has had accident. She is sometimes timid but she almost always commits herself for 100%. But that is now less because she lives in complete new surroundings
Billy Taggart: He has been a boy that only had lived with its mother since its brother in the army has sat. They do not have much money and its father sits in the prison. With its friends he has a large mouth but if he is driven in less very timid mother of Kerry is: They the mother of Kerry since the accident has had them of the job has been cancelled and entirely adjusted Kerry to ensure itself she feels himself sometimes guilty for the accident which Kerry have experienced them can complete well cake make father of Kerry: He is a nice man who can handle well children if he buys something he only looks at if it is beautiful and not towards the price
Wayne: Wayne are the accomplice of Billy if he gets by that Kerry him masters he will make Kerry living acid he has its even beaten-up. He has many brothers and sisters but he does exactly as if he does not know them June: She is of the first good girlfriends whom Kerry have June are also some that of the secret knows besides Kerry and Billy she is a nice little girl and has small sister’ Rosie '' them frequently comes at Kerry on a visit.


Summary:
Kerry Hollis is a little girl of approximately 15 or 16 years old. Her leg has been shattered by a car accident; for this reason she runs lamely. Kerry was a girl who was practising gymnastics which were well enough to the game are possible but by the accident is that no longer possible. Kerry had moved to a new neighbourhood. Because its parents find that they must start all over again and there also sit near on school. On school she has friends still no and them is even teased by three boys: Billy, Wayne and fats. Kerry was very unfortunate on school. Its mother is concerned and uncertain type who thinks that it is its debt that Kerry feels themselves this way unfortunately because they the car has controlled the teacher’s sees that there is something with Kerry and of the teachers decides with Kerry will talk. She is not possible as teachers think that she must have something extra’s. Kerry denies that there is something with her but if she continues to house then them is waited for Billy, Wayne and fats. The boys take away the case of Kerry and start with that throw over. If she lets for a Weil fall busy be fats the case of Kerry and the case falls in the dogs droppings. The droppings are entirely between the seams of the case and is no longer clean. Its father decides a new buy case met on school them June, and they become friends. The teachers find that them nevertheless a club must follow school such as gym club or something such but that want and dare Kerry. If she comes that afternoon at home decision them once in a box with old newspaper Article and medals of the time look at that she could do gym still. In that box she finds a newspaper with Article concerning one Taggart which sits in the prison. But then they know how Billy is called of its surname, as it happens, TAGGART! That Article used them to ensure that there for they are no longer by Billy and friends is teased therefore she shuts to Billy and says that she must protect him against pesters and differently the newspaper Article the complete school around will go. After a couple days see to June that Billy and Kerry June have wanted a strange relation know what to the hand there is for this reason goes June at Kerry along and Kerry tell her everything. June Council her to tell that it to its parents or to a teacher but does not dare Kerry. June are not it with that once and become angry them go to house and throw the door behind itself dense after a couple days blackmail Billy are no longer on school but Wayne and that will know them also. After a while for practising Wayne come her on search whereas Kerry on the ground slightly pushed by Wayne her face udder after them a little bit wears chattering Wayne break out its rock-hard her face them feel blood immediately her nose come. Then a teacher comes and them from is there together thrown Wayne does exactly as if they are the best friends and say that Kerry had fallen and he was accidentally there help her but the teacher knows that is something to the hand there. The teacher asks to Kerry if she was teased Wayne but she denies. Then she goes to the dressing rooms and looks at in the mirror. She is disgusted this way of them. She takes himself again for to resist itself why the next time after Kerry have run off decision them to Billy will and him tell everything, them discovered immediately Billy are no longer on school. Its mother has, as it happens, cancer. Billy guess Kerry to to fight back simply once. When Kerry in the park sat approached them June and told her everything what happens today there with her was. That evening sits them in its chamber if she sees Wayne running in the park. She takes a decision and will to catch Wayne for everything what he has done. Kerry passes by in the small woods to sit and wait to Wayne come. The moment Wayne come by she seizes him at the hair and beats him a couple time against the stones to them against is kept by its father the father of Kerry brings Wayne to the hospital and says against Kerry that them problems can get but that cannot Kerry make a difference because nobody will tease her ever still.

My own opinion:
I liked it, it was a good story. This way will let other people see how it shuts in the real world to. They show the fears of people who are teased and the way they handle with it. This way also a plague head can show you why this does not hear and what kind of damage can cause this at some people who are bullied by them. I found it a good tale and I want to say to people from my age or younger you could certainly read it its an interesting book.